USU’s aviation program had a temporary presence in Price during World War II and into the 1990s. Fast forward to 2019, and the Logan-Cache airport runway is busy with the program having grown from 160 students to 360 in five years. Utah State University pilots-in-training are once again flying over the desert landscape of the San Rafael Swell in southeastern Utah as the aviation program manages rapid growth.

USU Eastern has smaller class sizes, less air traffic, and lower tuition, including in the aviation program. Martinez said students receive the same training as those at the Logan campus, even though the first two years of their study are spent in Price. Students then make the move to USU’s Logan campus for their final two years.

Martinez was raised in Price and dreamed of becoming a pilot even when she was a little girl who constantly read books on how those “big fat machines got up in the air.” Her first experience on a plane came when her mother gave her a ticket to San Antonio as a 15th birthday present and she flew to visit an aunt there. Martinez said that experience absolutely solidified her dream of becoming a pilot.

As a Price native and a graduate of USU’s aviation program, Martinez takes pride in seeing the new program in action. The first class began just this fall semester, but Martinez is impressed with the group of young pilots in the program.

“We have extremely motivated students,” Martinez said. “They're on top of their homework, they're actually working ahead of schedule to keep flying. I'm seeing successes in every single flight with these kids.” 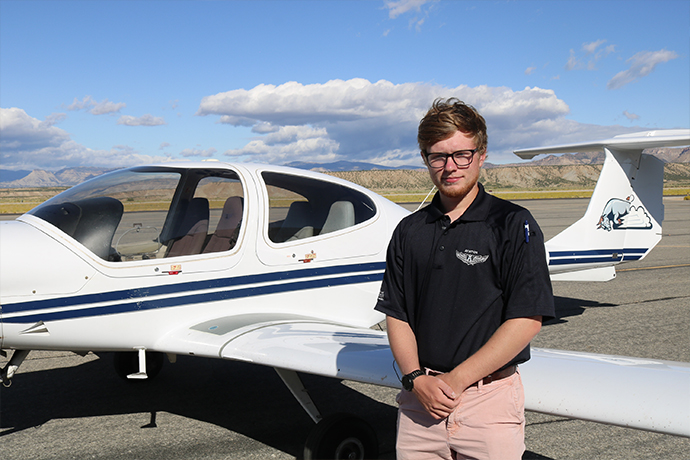 Most of USU Eastern’s student population comes from Carbon County and surrounding areas, but there are also students from as far as Anchorage, Alaska, like aviation student Eli Mckenzie.

“After touring other schools, it felt like I was less of a student and more of like a number,” Mckenzie said. “I just felt like this was a smaller program, I felt like there's more one-on-one with your instructors.”

Most aviation students, like Mckenzie, don’t just decide to become a pilot when they reach college – it’s something they dream of for years. The Alaska native felt pressure to enroll in other schools, but knew he wouldn’t get to fly a plane until after his first year on top of paying higher tuition.

Carbon County Commissioner Casey Hopes said Price and surrounding communities are seeing declines in jobs historically available at the area’s coal mines and powerplants. He sees students on USU Eastern’s campus as a critical resource for the future of the area.

The campus in Price has been a driving force to unite local business owners according to Hopes. He said the new aviation program is another tool to help grow the local economy.

“It's been a great process, especially the last couple of years,” Hopes said. “Those relationships have become even stronger. The university is not hesitating to be a partner in this. As a matter of fact, in some areas they're driving the bus.”

“I get it,” Martinez said. “It's hard work and I understand that, but I couldn't see myself doing anything else. I just love it.”