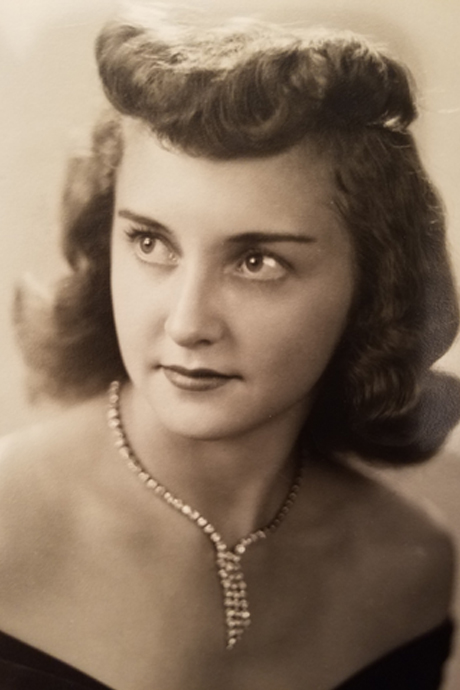 Many students arrive at college uncertain about their education goals and career plans. Miss Helen Lower wasn’t one of them.

“I decided in the seventh grade that I wanted to be a home economics teacher and my inspiration was Anna Lou Rees,” she said. “She came from the (Utah State Agricultural) college to teach home economics at Lewiston Junior High School. She was vivacious and excited about her work, and she was interested in all of us.”

As an aside, Helen recounted that the inspiring Miss Rees later married Gaurth Hansen, a biochemist who became provost at Utah State University, and is the mother of USU alumnus and Nobel Prize-winning economist Lars Hansen.

Helen enrolled in college in 1948, and things she learned even during that first quarter in Jean Richards Dance’s Clothing and Personality course shaped how she later taught her own classes at Logan High School.

“She wanted to build self-confidence in young girls,” Helen said. “She would tell us, ‘Stand in front of a mirror all by yourself and look at yourself eye to eye and say, I’m as good as anyone else. I’m as good as anyone else. If your eyes dart away from your face, you start over again until you can say it to yourself several times.’ She taught us to look people in the eye when we met them. I used that when I taught school and years later I had girls tell me how much that helped them feel good about themselves. Just something that simple from a teacher can make a difference.”

Besides clothing construction, textiles, foods and nutrition classes, Helen took biology, physiology, art, a three-course chemistry series. She also completed minor in journalism and worked on the campus newspaper. It was a busy time on the Logan campus with former soldiers and sailors returning from battle in World War II and using the GI Bill to earn college degrees. Helen recalls being one of just 20 women in a chemistry class of 125 students and among the three women in an economics class of 93 students. Her father frequently reminded her to stay away from “older guys who are looking for a wife” and complete her education.

Other classes in her major were filled with female students. In cooking labs, students were graded on their food preparation techniques, cleanliness, final products, and also the condition of the white dresses and aprons they were required to wear, which meant washing, pressing, and starching that uniform every week.

For decades, students enrolled in the College of Family Life and preparing to become home economics teachers were required to live for six weeks at the Home Management House, a structure that still stands at the foot of Old Main Hill. Six girls at a time lived in the house, along with the professor, and each week the students rotated duties in the house and their performance was graded.

Among the tasks in the rotation were laundry and ironing, which meant pressing all of the home’s table and bed linens—yes, ironing all the sheets, pillow cases, placemats and tablecloths by running them through the mangle iron (Look it up if you don’t work with textiles for a living or were born after about the mid-1960s). 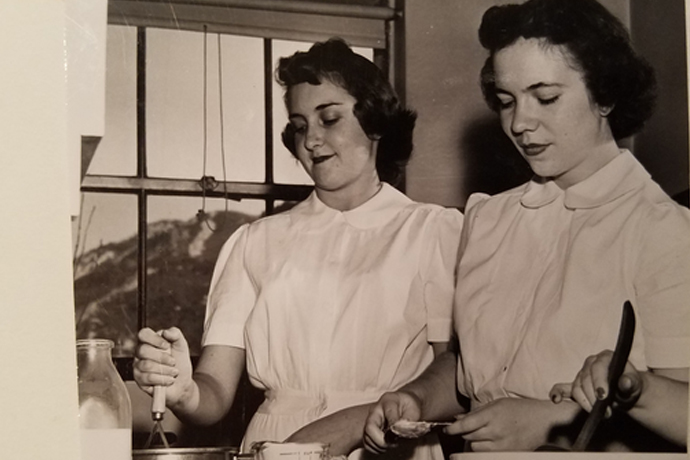 “Girls were in charge of meal planning and cooking and we had to plan and prepare breakfast, lunch, and dinner for the week,” Helen said. “Meals had to provide all the necessary vitamins and minerals for the day, so that was worked into your meal plan, and there was a budget. Everything was graded. Breakfast was served at 7 a.m. and you were expected to be at the table dressed and ready for the day. The table had to be set properly for breakfast and dinner, and lunch you could come for any time that worked with your schedule. Everyone was expected to be at dinner at 6 p.m.”

Other weeks you might have been in charge of the formal living room, which meant dusting, cleaning floors, and washing the windows. Though it may sound like a tough six weeks, Helen remembers it as a fun place to live with her fellow students and an experience that reinforced how clearly explained structure, cleanliness, and etiquette can ultimately help people feel more at ease.

Students in Quantitative Cooking classes prepared large quantities of food that was served in the university’s cafeteria, which was in the basement of the Family Life Building.

“We made salads and soups,” Helen recalled, “Once Miss Vermillion was overseeing our work there and asked if I had tasted the soup I was making. I told her I could tell it was good from the smell and she said, ‘Well, Helen, you’ll never be any kind of cook if you don’t taste the food as you prepare it.’ I thought of that for years every time my husband reached for hot sauce or the ketchup.”

Helen met her future husband, Jack Simmons, at the university when she was a freshman and he was a junior. He was called on a mission to New Zealand for the Church of Jesus Christ of Latter-day Saints and returned in July 1951, just in time for the Korean War to prompt his being drafted six weeks later. They became engaged when Jack was on a 7-day leave at Christmas. He returned from training the end of April and they married two days later, Helen wearing a wedding gown she made using her considerable sewing skills, a Vogue Designer pattern, and inspiration from a gown she saw in Brides Magazine. Then, after just two weeks of married life, Jack shipped out to Japan to begin work as a cryptographer. 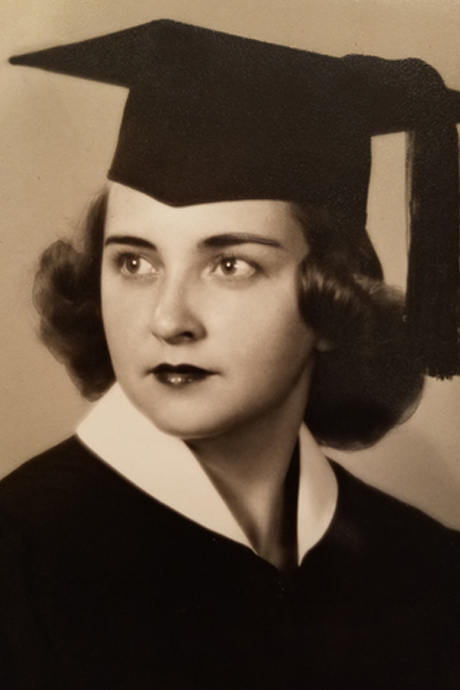 Helen graduated and went to work teaching at Logan High School while he was away. Her first contract in 1952, paid $2,600 per year for teaching home economics, including family relations for girls, foods and nutrition, plus a journalism class, and supervising students on the school newspaper staff and the district’s night classes for adults. Later she also taught clothing and textiles. She taught for three years, until her husband’s pursuit of a Ph.D. and post-doctoral work in biochemistry took them to Caltech and then Stanford University. They returned to USU where Jack was a faculty member and administrator for 32 years. As their family grew, Helen’s sewing skills kept them all well-dressed.

“It was cheaper then to make clothes for children than to buy them, though that’s not the case now,” she said. “We had a children’s clothing class when I was in school, and one of the best classes I had at Utah State was advanced clothing with Miss Gilmore. She brought beautiful fabric samples from all over the world…We sewed with excellent fabric and worked with a partner to measure and fit things properly.”

Helen has seen all sorts of changes in clothing costs and styles, all to be expected for someone who is 90-plus years old. She doesn’t sew much now, but has marked alterations to fit clothing for hundreds of people over the years, been asked to organize family members’ kitchens, and put her skills to work teaching the finer points of housekeeping to hundreds of LDS missionaries when her late-husband presided over the Oregon Eugene Mission.

It’s been decades since Helen was inspired by her junior high home economics teacher —who, remarkably, currently lives in southern Utah—but as she tells stories of Miss Rees and describes here as “vivacious” (adjective: Attractively lively and animated), it’s clear that the description also applies to Helen Simmons.