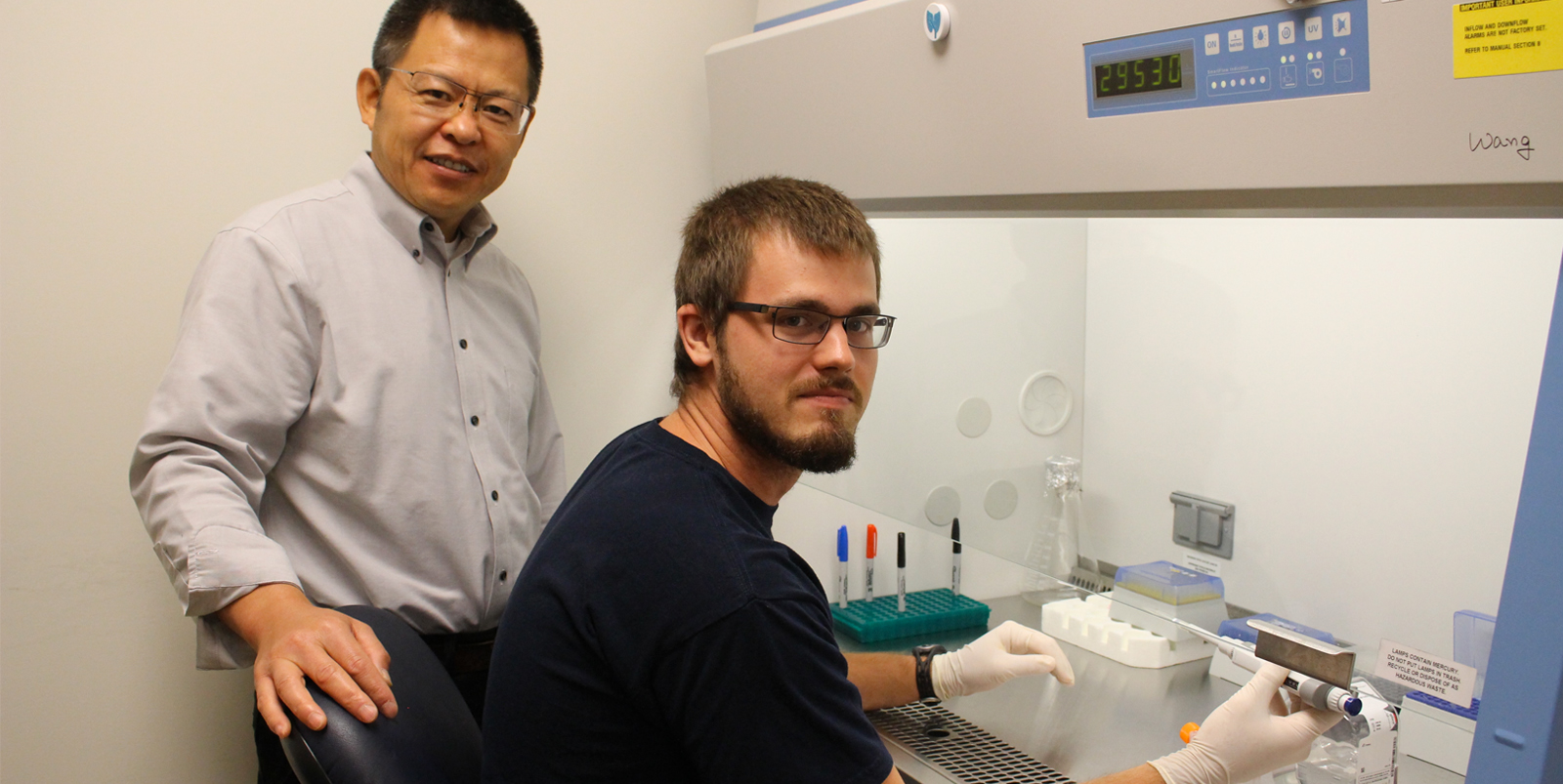 Using an animal model they developed, Utah State University and Saint Louis University researchers have identified a strategy that could keep a common group of viruses called adenoviruses from replicating and causing sickness in humans.

The study, published in PLOS Pathogens, is the first to report use of a genetically modified Syrian hamster that may prove important in studying other dangerous viruses.

“The adenovirus can cause colds and infections in the eyes and respiratory system and generally are not serious,” said William Wold, co-senior author of the paper and chair of molecular microbiology and immunology at Saint Louis University. “However, like many other viruses, adenovirus can replicate at will when a patient’s immune system is suppressed. Adenovirus can become very dangerous, such as for a child who is undergoing a bone marrow transplant to treat leukemia.”

Wold and his colleagues found that Type 1 interferon is critical to preventing adenovirus from multiplying. Interferon is a protein and part of the body’s immune response that fights against invading pathogens. Cells that are infected by a virus release interferon to signal nearby non-infected cells to be on alert to fight the invading virus.

Researchers led by Zhongde Wang, associate professor of veterinary diagnostics and infectious diseases in USU’s Department of Animal, Dairy and Veterinary Sciences and co-senior author of the paper, turned off the STAT2 gene in a group of Syrian hamsters, which disrupted the Type 1 interferon pathway by interrupting the cascade of cell signaling. The team compared that group with a group of wild-type control animals, both of which had adenovirus. The genetically modified Syrian hamsters had 100 to 1,000 times more virus in their bodies than the control.

“While thousands of papers have been published on the replication of adenovirus in a cell culture model, until now, not much has been understood about the molecular details during adenovirus replication in humans,” Wold said.

Wang said, “Besides providing an insight into adenovirus infection in humans, our results are also interesting from the perspective of the animal model: the STAT2 knockout Syrian hamster may also be an important animal model for studying other viral infections, including Ebola, hanta and dengue viruses.”

The animals used in the study with the STAT2 gene disrupted–or knocked out–are the first Syrian hamsters developed for gene-targeting.

“Due to their unique physiology, the Syrian hamster offers advantages over other rodent species in modeling human diseases,” Wang said. “But the application of hamsters as animal models suffered from the lack of genetic tools to engineer their genomes. The success we achieved with gene-targeting in the Syrian hamster provides the opportunity to create genetically engineered hamsters as models for many of the human diseases for which there are either no existing animal models or models with severe limitations.”

Previously, Wold led a research team that identified the Syrian hamster as an appropriate animal model to study adenoviruses because human adenovirus replicates in these animals, causing sickness that is similar to that seen in humans. Wang said the work reported in PLOS Pathogens is significant because there was previously no animal model for studying adenovirus replication without using drugs to suppress animals’ immune systems. The study provides a basis for using the STAT2 Knockout hamsters to understand infection and to develop antiviral drugs and vaccines.

In addition, Wang said, a variety of adenoviruses–known as oncolytic adenoviruses–preferentially infect and kill tumor cells are of great interest in treating human cancers, but none of the small animal models currently in use allows adenoviruses to replicate effectively. Because the newly developed hamsters do permit the virus to replicate, they open a door to new methods of developing and studying cancer-fighting adenoviruses.

Wang’s research group made a technical breakthrough in 2013 with gene targeting in the golden Syrian hamster and produced the world’s first genetically engineered hamsters, in collaboration with Kong’s group in South Korea. The initial advancement was also supported by technical contributions from two other laboratories at USU led by Ken White, animal scientist and dean of the College of Agriculture and Applied Sciences, and Thomas Bunch, emeritus professor of animal science.

The paper is available on the PLOS Pathology website at:  http://journals.plos.org/plospathogens/article?id=10.1371/journal.ppat.1005084