A Century of Agricultural Education 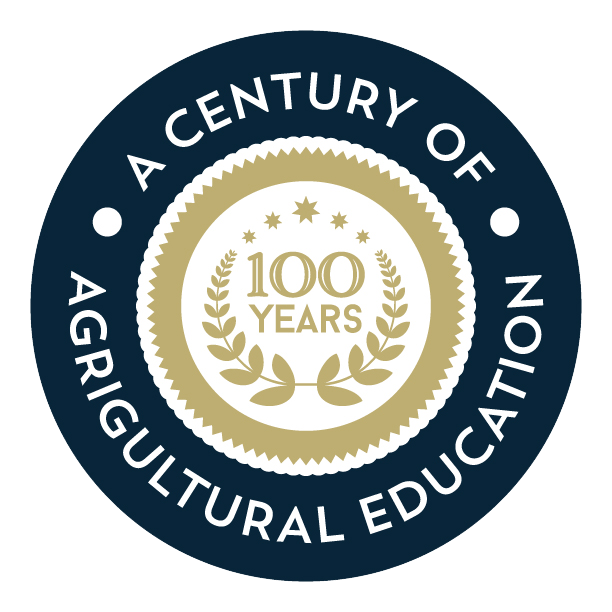 When the Smith–Hughes Act passed the U.S. Congress in 1917, providing funds to train high school agriculture teachers, agriculture was a primary occupation among Utahns. But the world was changing. The infusion of federal funds to train and employ teachers to prepare people “who have entered upon or who are preparing to enter upon the work of the farm,” came while World War I still raged in Europe and industrialization was pulling people away from farming.

New technologies and methods were changing food production, and people who formerly grew much of their own food left the farm, meaning farmers had the task of producing enough food for everyone. The war put a spotlight on food insecurity and people turned their yards into Victory Gardens. Given these themes—the rise of new technologies, interest in local food production, war and global events impacting people in the U.S., and farmers trying to meet the challenge of feeding more and more people—it seems that the more things change, the more they stay the same. Agriculture adapted then, and continues to change to meet today’s challenges and opportunities. 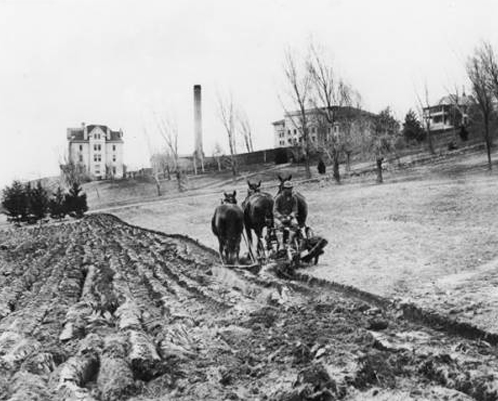 When the Smith-Hughes Act passed, the Agricultural College of Utah had been the site of research and preparing people for work in agriculture for 29 years. The school offered courses in horticulture, animal and dairy sciences, agronomy, economics, and related subjects, but there was a major obstacle in the plan for Utah’s land-grant school to take on training people to become high school agriculture teachers: the state legislature had mandated in 1907, that the “AC” was to teach agriculture, industrial arts, and economics, and all teacher training was restricted to the University of Utah.

There were people already teaching agriculture in Utah high schools at the time, but the route to the profession was not simple. USU agricultural education Professor Brian Warnick recalls how his great-grandfather, Adolphus Peter Warnick, wanted to teach high school agriculture, so he (and others like him) graduated in agricultural studies from the UAC and then had to attend the University of Utah for courses in pedagogy in order to qualify for a teaching certificate. At the start of the new program, faculty from the UofU traveled between Salt Lake City and Logan–which was no beautifully paved and quick journey–to provide pedagogy training, or stayed in Logan under short-term agreements, until 1927 when the state legislature expanded the UAC’s mission to include teacher training.

Ongoing teacher education has always been part of the profession, but where online learning or attending a short course are now the norm, agricultural education teachers once made the trek to Logan for the annual farmers’ encampment on the Quad, sleeping in tents and learning the latest methods during the day. In his 1965 book The Early Development of Vocational Education in Agriculture in Utah, L.R. Humpherys, who was then a USU emeritus professor and former State Supervisor of Agricultural Education in the Utah Department of Public Instruction, heralded “One of the important major professional improvement devices used” since 1918 by the state supervisor’s office: the “Monthly News Letter.” With the speed of information today, it is difficult to relate to a single monthly newsletter being groundbreaking.

“Typically, a boy in a Corn Club would negotiate with his father or another farmer to let him have his own plot to grow new varieties and use new techniques,” Professor Warnick said. “Then, when the boy’s plot, and it was always boys, out produced his dad or grandfather’s plots, they got interested in trying new hybrid varieties too.” 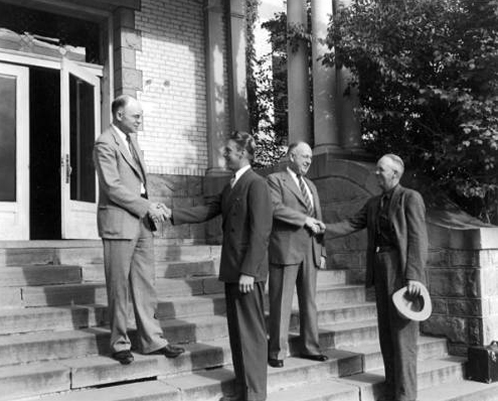 That sort of thing can still happen when a student’s Supervised Agricultural Experiences, which have long been a critical part of successful agricultural education programs, meet older methods. But “ag ed” or any of the other names the program has been known by over the past century, has long outgrown being only about growing a crop or raising a calf.

“It’s not about cows and plows,” said assistant professor Tyson Sorensen. “Ag ed is drones, satellite images, cloning, soil science, natural resources, business, public policy, and agriculture is woven into many other industries and other disciplines. Agricultural education is really the applied science. We put concepts students may have learned in other classes, that maybe didn’t quite make sense to them, into context. So, for example, we take the x, y and z formula someone didn’t quite grasp in math and use it to build something. Then it makes more sense.”

When Gary Straquadine was a high school agriculture teacher 30+ years ago, the curriculum was ruled by textbooks.

“We worked our way through units in sets of textbooks,” Straquadine recalls. “There were sets for the animal area, plant area, ag mechanics, etc., and those drove the curriculum. “

Straquadine, who currently serves as interim chancellor at USU Eastern, recalls various iterations agricultural education has been through during his career. In the 1990s there was a push to certify agriculture teachers to teach biology so ag classes qualified for science credit.

“And we built curriculum so science teachers could teach agriculture,” Straquadine said. “That included a whole other group of teachers who were cross-teaching agriculture for science credit. Utah was quite progressive in doing this and a lot of states have since used our model.” 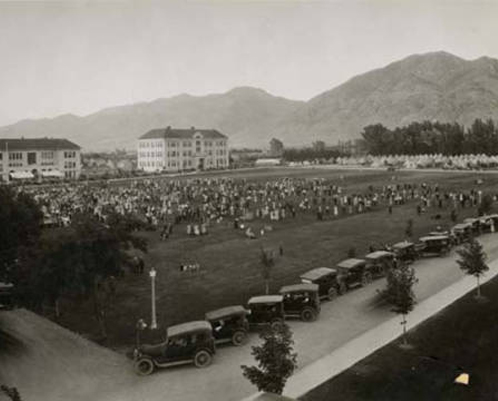 Good-bye to Going by the Book

As the importance of textbooks waned, replaced by information sources that could more easily keep up with rapid advances in knowledge, it became easier and more important for teachers to customize curriculum to the needs and experiences of local communities.

“There are still standards from state offices of education, but there is enough latitude that how I would choose to teach a principle in my community really depends on agriculture in my area,” Straquadine said. “As you go north to south and east to west, there are big differences in agriculture, and that is just on the production side. So they may talk about a concept as part of dairy production in Smithfield, but in Carbon and Emery counties they focus on natural resource issues, and in Sanpete County they talk about turkeys.”

Warnick pointed out that agriculture education programs are rapidly growing in urban and suburban areas where students usually have no farm experience and are just looking for an interesting class. Then they find themselves drawn in by learning about where their food comes from, and interested in the business skills they learn. In some cases, as Straquadine put it, they take an agriculture class because they are a couple of generations removed from the farm and have romantic notions about what they think agriculture is or what they think it should be.

“Then students begin to understand how you look critically at data to make decisions in agriculture, about how international trade is involved, and how agriculture to feed the world is not just a backyard enterprise,” Straquadine said. “They learn that agriculture is a major economic and political policy undertaking.”

Associate Professor Becki Lawver said there are great USU alumni teaching agriculture across the state (and beyond) who supervise student-run greenhouses, teach animal science using snakes or pets, and even lead students in caring for school farms and gardens.

Straquadine said, “Exciting agriculture programs are always led by highly competent, excited, ag teachers. When you look at the research, it’s not the money, the size of the school, whether it’s rural or urban. What success comes down to is the teacher. So we must continue to train teachers for excellence in agriculture content, but also in pedagogy.”

He added that while technology is important, it must be incorporated but not “worshipped” because it can’t do everything.

“It doesn’t matter if someone can control a tractor or run robots from their phone if they don’t know why they plant or manage crops a certain way, where they are going to sell their product, and what the return on investment has to be for technology on the farm to pay for itself,” Straquadine said.

Periodically, a school board member or legislator suggests that agricultural education is so effective and important that it should become a required class for all high school students. Straquadine disagrees, because once a subject is required, a more rigid set of standards will restrict the curriculum.

Likewise, when STEM became the hot acronym in education, many people said it should be STEAM with an “A” for agriculture. Warnick disagreed because that change would undermine the fact that science, technology, engineering and math are all components of agriculture.

Sorensen said he is optimistic about the future of agriculture education because people are realizing that agriculture is tied to many of the big issues societies face.

“Issues like having nine or ten billion people on this planet by 2050, which means we have to double our current food production in that time,” Sorensen said. “And how will we do that? How do we step up production worldwide? It will take understanding technology and genetically modified organisms, and considering how we do these things and protect the planet so we can continue to feed people, and do it with a changing climate and limited water. They are complex problems, but if solutions don’t start with kids engaged in junior high and high school agriculture programs, who is going to tackle them in a holistic way?”

His sentiments echo those in the preface of Humphrey’s 1965 book, which says of agricultural education, “It truly lays a solid foundation for better tomorrows which can come about only through devising better ways of dealing with the good earth by those who choose to be closely associated with it.”