About 5 years ago Robert Ward and Korry Hintze, researchers in the Department of Nutrition, Dietetics and Food Sciences, started wondering if research mice were being fed too well. After all, if they are supposed to be stand-ins for humans, shouldn’t they be eating a diet closer to that of the average, typically somewhat unhealthy, human?

“We are feeding them the equivalent of what a health nut would eat in terms of optimum vitamins and minerals,” said Hintze. “This diet emerged in the late 1970s when researchers realized feeding mice random diets compromised research results. They needed a diet that would be identical in Phoenix or Boston.”

The team that created that standardized diet for lab mice worked from experience with large farm animals. Of course you want beef and dairy cows to have the best possible diet for health and productivity, Hintze said. Similarly, they designed a mouse chow that would promote the healthiest possible mice, not necessarily the best model for human therapeutics research.

You have probably noticed that your fellow humans don’t always make the best food choices, but how can you mirror that in mouse diets? Your first impulse might be visions of mice stopping at tiny fast food drive-through windows and heading home for an evening of Netflix and video games in the mouse hut. It’s not quite that simple, but you would not be far off.

If you put out a bunch of fast food for them, the mice will eat it and get fat, Ward said. Giving them a mouse version of the stereotypical American diet high in fat, sugar and salt is good for modeling obesity, but not great for modeling other research on nutrition and disease. Nobody had taken a holistic approach in terms of micro- and macronutrients.

Ward, Hintze and cancer researcher Abby Benninghoff, associate professor in the Department of Animal, Dairy and Veterinary Sciences (ADVS), examined national food intake databases and took the 50th percentile amounts of the most common nutrients and distilled those into mouse pellets. The result was the “Total Western Diet.” To adjust the diet for tiny mice, they normalized nutrients per calorie to make it equivalent to human consumption patterns. Similar to the previous version of mouse chow, standardization is important to the experimental process, Ward said. The interdepartmental collaboration with Benninghoff allowed the new diet to be tested in her lab. 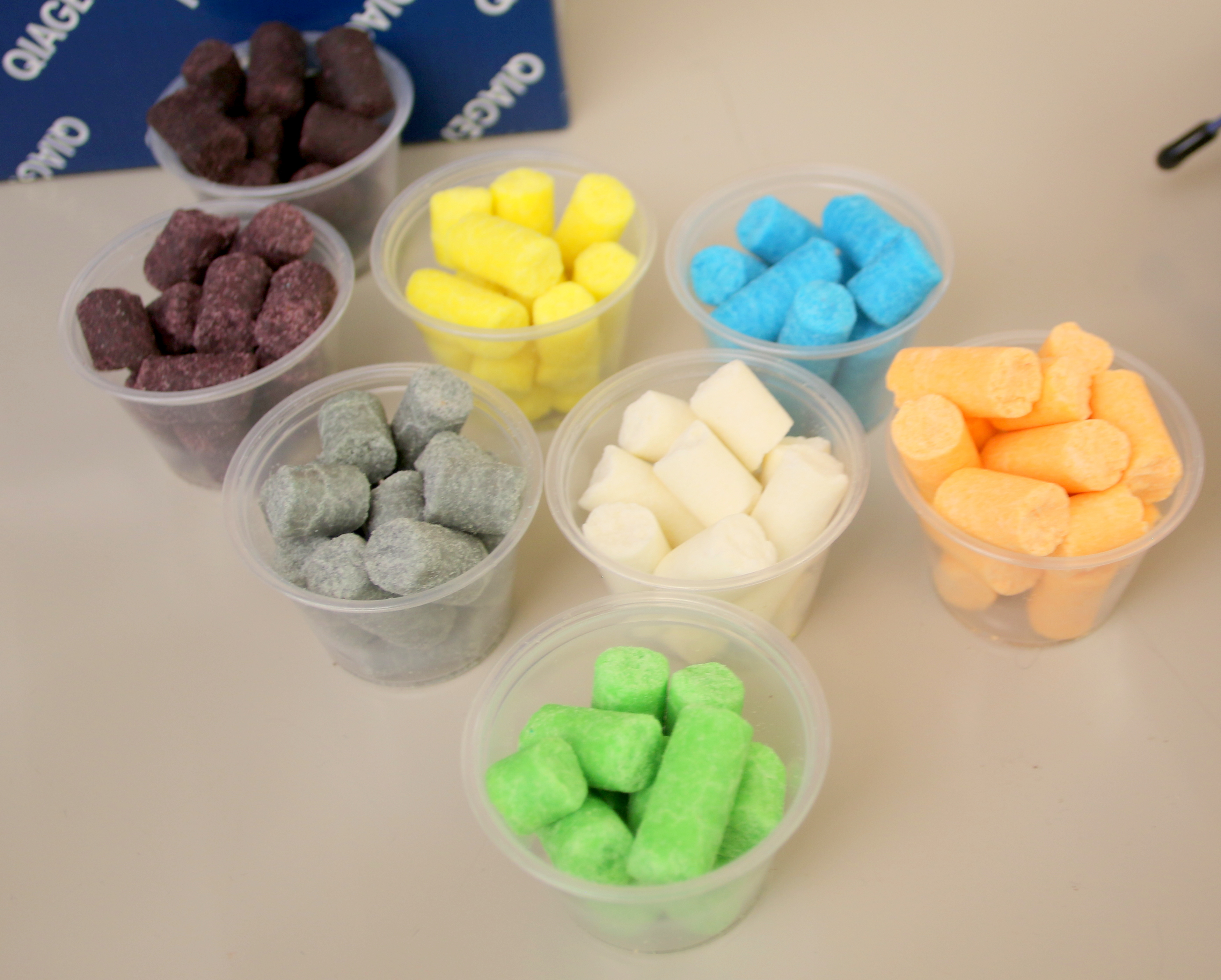 Initially, there was some resistance to this re-think of mouse diets, but 5 years into the Total Western Diet project, Ward and Hintze said they are starting to see more interest and results. There are seven or eight other universities using the diet and several papers have been published.

“The mice are definitely are getting more cancers while eating the Total Western Diet,” Ward said. “The question is why? Is it because they are eating too much fat? Not enough calcium?”

This improved animal model allows researchers such as Bennighoff to more confidently introduce nutrients to mouse diets to see if there is a reduction in cancers.

“In our lab we have a strong interest in cancer prevention,” Benninghoff said. “We are interested in ‘functional foods’; those that have substances that promote health. There are a lot of substances other than the usual calcium, B12 and others that you see on a product label that interact with our bodies. These are called ‘bioactive food chemicals’ that help promote health.”

Among these bioactive food chemicals are catechins found in green tea that have anti-inflammatory, antioxidant and anticancer properties, Benninghoff said. Green tea is the second most-consumed beverage worldwide, but it is not significant in the American diet. Introducing green tea into the diets of mice being fed the Total Western Diet should allow researchers to draw conclusions and make recommendations to Americans. The team is also looking at the effects of black raspberries in the diet.

Still, mice are not tiny humans and vice versa. Mice have different metabolisms and much shorter life spans than humans. There are more complex mathematical models that help determine how much a gram of something in a human diet equates to in a mouse diet.

According to Benninghoff, the next step is to look at the purified diet versus a whole foods version of the Total Western Diet. The purified Total Western Diet is great for consistency, but it lacks some of the complex fibers that come with whole foods from the grocery store. This limits the comparison with humans because of the role the microbiome, or gut bacteria, plays in interactions with food. Hintze explained that the new mouse diet is “purified” in the respect that it’s made from generic components such as sugar, vegetable oil, milk protein and a vitamin and mineral mix.

“For the whole foods version we are using the 25 most consumed commodities that can be bought at the grocery store,” Hintze said. “We then cook, freeze dry and pulverize them into a bank of powders such as meats, dairy, flours and high fructose corn syrup.”

The big difference between the purified diet and the whole foods diet is the amount of fiber, Hintze said. The additional fiber in the whole food diet supports the growth of different gut bacteria that may be very beneficial for health. As part of the quest to understand the effect of the Total Western Diet on gut health, the researchers have transferred the bacteria of a human microbiome to mice so the mouse model more accurately reflects what goes on in humans.

“We are only just beginning to understand all the implications of microbiome health on human health,” Ward said.

What’s the future of the Total Western Diet? Hintze and Ward said there is no reason that one couldn’t design a Total Asian or Total French Diet. You could also design specialty diets such as a Paleo diet or a Mediterranean diet to test purported health benefits.

Mice are also used in many experiments other than in studies of human nutrition, Ward said. They are used by psychologists in pain and addiction behavioral studies. These researchers could also benefit from a mouse diet that is closer to what their human subjects eat. Mice eating the Total Western Diet might be faster or slower at solving mazes.

If it works for the mouse model, the Total Western Diet could also enhance studies with large animal models. A small study done in collaboration with Clay Isom, a reproductive physiologist in the ADVS department, found that pigs fed the new diet became overweight and showed early signs of diabetes. According to Isom, the Total Western Diet is a suitable diet for inducing obesity in pigs, similar to what is observed in humans, but different from what is observed in mice. The impact that the diet had on reproductive tissues may also shed light on how obesity, and diet in general, can impact reproductive performance in a wide variety of species, including humans.

There is one thing left out of the Total Western Diet: broccoli. It constitutes less than one percent of the American diet. Hintze said it is also the only food he has seen a mouse spit out. So apparently mice really are similar to the average American.