"WHO AM I?" The New Miss USU Tells Her Truth 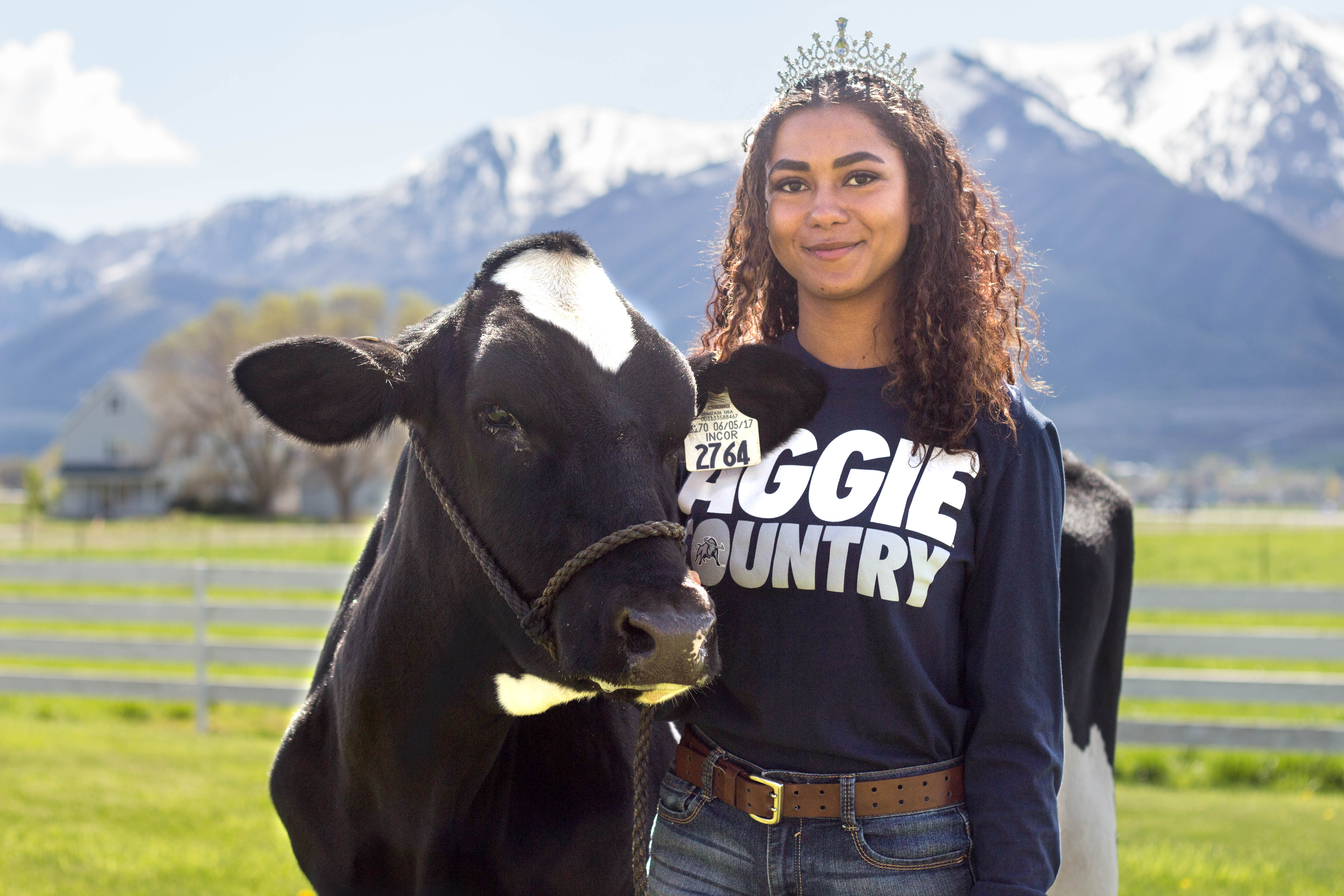 Alexis Cooper didn’t set out to win the Miss USU pageant, but she did. Her goals in entering were to be part of an event at a school she has come to love, and to make the pageant’s theme, There’s More to Me, an opportunity to tell people some of her truth about being a young black woman who is part of a predominantly white student body. For her talent, Cooper wrote and performed a spoken word poem about some of her experiences.

The Utah native, who is majoring in bioveterinary science and completing minors in chemistry and biology, has dreams of becoming a veterinarian, though opportunities to do undergraduate research are showing her other interesting paths and complicating the decision a bit. She applied for and received an Undergraduate Research and Creative Opportunities grant that will fund her summer research with Professor Juan Villalba, studying ways to make Medusa head, an invasive weed, more palatable to grazing cattle.

“It’s amazing to me I get to do research and work with animals,” Cooper said. “I love it, but I also love face-to-face interaction with people, so vet school is still very interesting to me.”

She credits her maternal grandmother Irene Jenson, a USU alumna, who loved all kinds of animals for sparking an interest in veterinary medicine. Cooper’s mother, Angela Jenson, also attended USU and thought vet school might be her path. Cooper said her mother soon realized she was overly empathetic when it came to animals and that vet school would not be a good fit for her. She took her love of science in a different direction and became a pharmacist.

Cooper said she gets her curiosity and love of science from her mom, and her love of people from her dad, Myron Cooper, whose big and warm personality “apparently didn’t leave enough room in my brain for organic chemistry.”

Cooper, who did not grow up around livestock, said she was surprised at how much she likes large animals.

“I would like to be a mixed-practice vet (treating large and small animals),” Cooper said. “I am concerned about animal health and welfare, but I am also pretty practical and know that raising large animals comes with financial realities. I have so much respect for farmers and the time and energy it takes to be successful.”

She is also surprised at how much she loves USU. Cooper didn’t start her college career at USU. After high school, she had a full scholarship to Tuskegee University and made the move to Alabama to attend the historically black university. A family tragedy brought her back to Utah and she decided to finish college closer to home.

“I love USU,” Cooper said. “I didn’t think I would like it here. I’m black. I am not LDS. Nearly all my friends from high school who came here are married, some even have children. I just didn’t think this would be the place for me. But it’s so beautiful here! I grew up near mountains, but not this close. I love to hike, float the Oneida Narrows, just be outside. Plus, tuition is a great deal and we have a great animal science program. People are so open and I really feel like everyone is interested in my education and my future. We are all different in many ways, but it really feels like we are a big family. Our big Aggie family.” 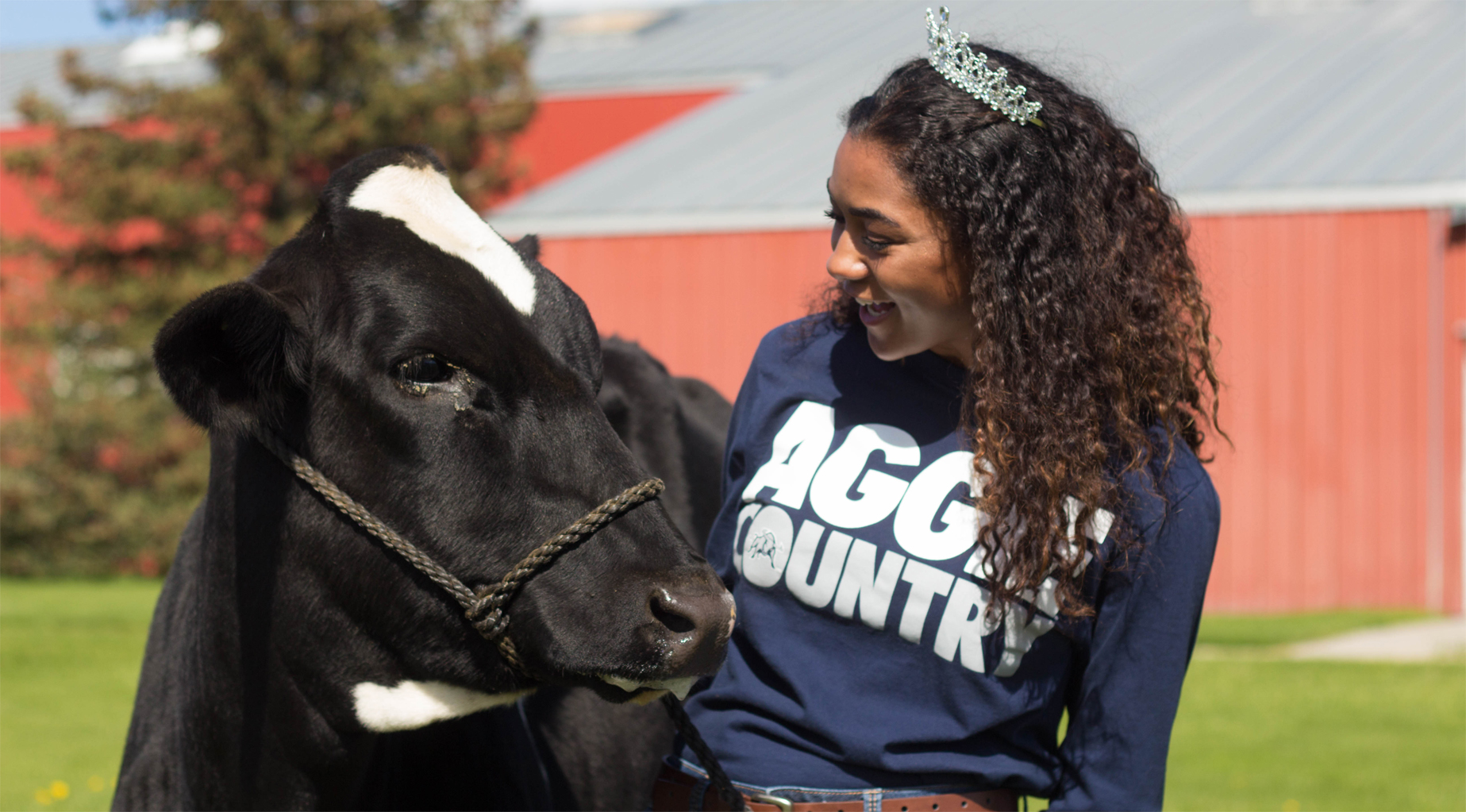 Not everything in her life has been warm and inclusive though, and Cooper transformed some of those experiences and feelings into a spoken word poem she performed at the Miss USU Pageant.

Cooper said she just lives her life―school, work, 13 years of piano lessons, playing viola (and even winning fiddling contests with a viola), dancing, leading Kappa Delta sorority meetings, serving on USU’s Panhellenic Council, staying close with her family, making friends―and then someone says something that feels like they are making sure she knows her color makes her different, like the time a student Alexis felt was a friend told her how she had been scared of her when they met because Alexis wore her in box braids.

“I have always felt like I was outside a sort of big glass house looking in,” Cooper explained. “But occasionally someone opens a window or a door and I have a chance to get to know people and explain to them how some of the things they do or say affect me. It’s doesn’t always happen right in the moment that they say something because it often feels overwhelming at that point.”

Time in Alabama left a lasting impression, and Cooper came home with a changed worldview. At Tuskegee, for the first time, her skin color didn’t make her different from others in her classes. She was surrounded with other black students and faculty who were educated, pursuing big goals, mentoring, and leading.

While race and cultures can divide people, Cooper said she thinks many aspects of a person’s outward appearance are judged and assumptions are made based on things that don’t matter or that people have no control over.

“You would never say ‘I really like you, but those blue eyes…I could never tell my parents I am dating someone with blue eyes,’” Cooper said. “That sounds ridiculous. Or if I said, ‘I’m a little afraid of people with hair like that. You know how people who pull their hair back are. Could you please take your bun out because it feels very aggressive?’ That sounds crazy.”

The poem was the product of writing as a way to work through difficult experiences and painful comments. Cooper laughed when asked if she had any previous pageant experience.

“Are you kidding? I grew up with three brothers,” she said. “I am not a pageant girl!”

She decided to bypass piano, dance or viola as her talent selection because she never thought she would win and her hope was to educate the audience. She reworked a poem she had written and chose her words carefully because her goal was to enlighten, not anger. But even after all that work and lots of rehearsal, Cooper said she has never been so scared. With the stage lights in her eyes she could not see people in the audience or their reactions.

“I don’t really have a good sense of how time passed then and how long it was, but I finished, stepped back from the mic, and there was just silence for what felt like a solid 5 to 10 seconds,” she recalled. “I thought ‘Well, game over. I should have played the piano.’ And then the applause was so loud. I left the stage and cried, I don’t know why, it was just a lot of emotions all coming up. Then one of the other women told me the audience was standing to applaud.”

So the young woman who wasn’t going to win finds it strange to wake up with a crown in her room. She is figuring out what that means and how she might do some good while she has an added opportunity. And she is already glad she braved the poem and didn’t decide to play the piano.