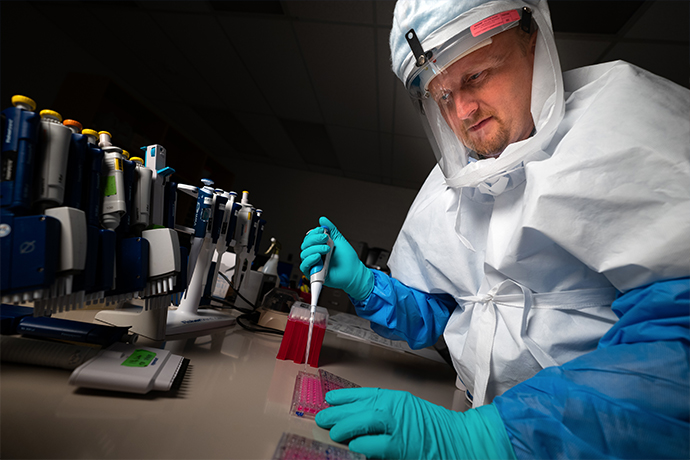 Although they feel a sense of urgency in their experiments, working with this virus requires methodical attention to detail. Incubation times, chemical and physiological processes, and hamster gestation don’t speed up because researchers feel a heightened sense of urgency.

Researchers at Utah State University’s Institute for Antiviral Research have been at work since February testing antiviral compounds and licensed drugs for their effectiveness against the SARS-CoV-2 virus, the cause of the COVID-19 pandemic. The institute specializes in developing animal models for testing antiviral agents and vaccines and started its initial coronavirus work supported by a $2.5 million grant from the National Institutes of Health (NIH). More funding has since come to the institute from NIH and other sources. 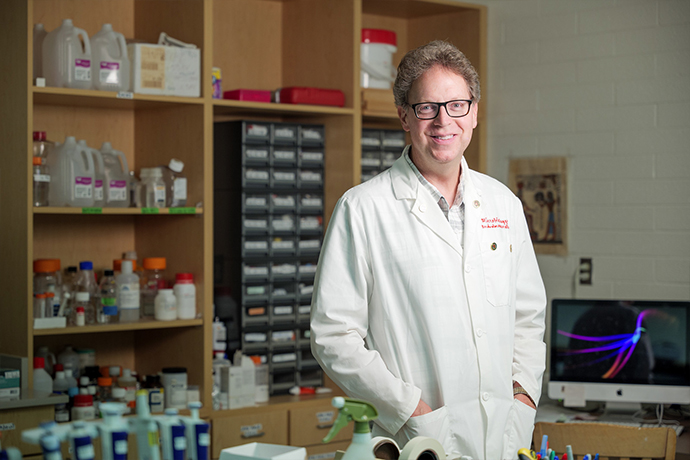 Bart Tarbet, a research associate professor in USU’s Department of Animal, Dairy and Veterinary Sciences (ADVS), is lead investigator on the project, in collaboration with Brett Hurst, ADVS assistant research professor. The scientists investigate how the virus affects organs and tissues causing disease―a critical step in developing treatments and vaccines―and how the virus responds to various treatments. Institute for Antiviral Research (IAR) faculty and technicians began working with the novel coronavirus in test tubes and cell culture plates in February, and have been working with what Hurst said is a very promising animal model for testing possible treatments.

Because of the urgent need to better understand the virus and treat infections, the research team experiments with different disease models simultaneously, Tarbet said.

“We understand the urgency. …I proposed studies with the virus in the lab, in a mouse model, and in (golden Syrian) hamsters that are genetically engineered to be susceptible to viruses that infect humans,” Tarbet said.

The hamsters are the result of genetic engineering done by USU ADVS Professor Zhongde Wang. His lab developed the model because viruses frequently attach to receptors in humans that are not present in animals, severely limiting the ways that potential drugs to prevent or treat diseases can be effectively tested. Hamsters from Wang’s lab have a human gene inserted in their DNA for the receptor to which the novel coronavirus attaches and is taken up into cells.

Hurst said IAR researchers have infected a number of the hamsters and seen them develop disease signs like severe respiratory infections. The group is still characterizing the model and clinical signs to better evaluate if symptoms improve following treatment.

“We see differences among the hamsters as to how the virus affects them and to what degree,” Hurst said. “But they are similar genetically, not identical but similar, so we see degrees in the signs of disease but not the wide range of severity of the disease in hamsters that we do in humans.”

“Of all the antiviral compounds that we evaluate in vitro, less than five percent will show good activity without toxicity in cell culture,” Tarbet said. “Then the compounds that appear to have an effect in vitro are evaluated in animal models. We consider many factors like the dose and route of administration. We also investigate the therapeutic window, how long before virus challenge it should be administered and how long after virus challenge it can still be effective as a treatment? So in cell culture and by computer modeling we make predictions, but it’s in the animals that we find the truth because animals are far more complex than cell cultures.”

Just as test tubes are not rodents, rodents are not humans, so at each step in the process of gaining approval to treat patients, more compounds are proven ineffective. In January, the World Health Organization published a short list of “candidate therapeutic agents” for evaluation against COVID-19 and the USU team has worked with some of those compounds and new ones. The NIH added several other potential drugs to the list, including chloroquine and azithromycin that were mentioned in press briefings with the U.S. Coronavirus Task Force. Tarbet pointed out that azithromycin is an antibacterial drug―not an antiviral―suggested to protect against co-infections in patients, but the institute’s previous studies found no benefit from the antibiotic in mice that were infected with an influenza virus.

Although they feel a sense of urgency in their experiments, working with this virus requires methodical attention to detail. Incubation times, chemical and physiological processes, and hamster gestation don’t speed up because researchers feel a heightened sense of urgency.

All work with the virus is done by faculty researchers and lab technicians who are trained to work safely in the institute’s level 3+ biosafety containment laboratory. (Note: biosafety levels are ranked 1-4, with 4 being the most stringently regulated. There are few level-4 labs in the world other than those run by federal-level health and safety organizations. A graphic explaining the differences among laboratory biosafety levels 1 through 4 is available at the Centers for Disease Control and Prevention’s website, cdc.gov/cpr/infographics/biosafety.htm ). 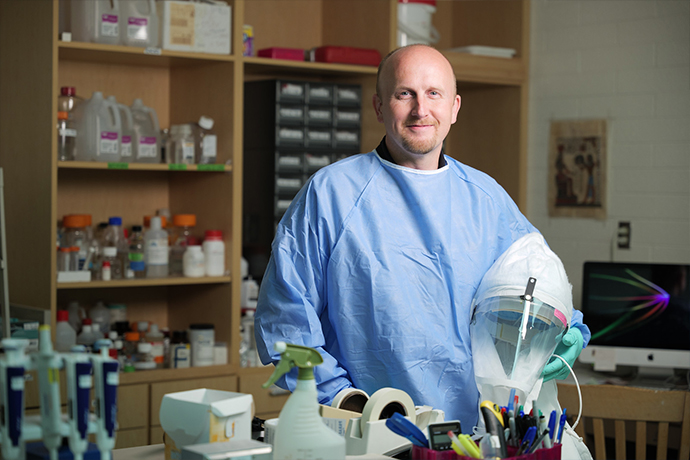 Hurst said, as a virologist, he has been concerned that many social media messages in the early days of the pandemic that tried to minimize the virus and its probable impacts with comparisons to rates of illness and death caused by seasonal influenza. Many more people typically get influenza, but the percentage of people who become extremely ill or die is much higher with COVID-19 infections.

“While the number (of deaths) may go down, it is still likely to be higher than influenza and thus it represents a greater threat at this time and something that we need to be vigilant about,” Hurst said.

“What is surprising about this virus is how rapidly it has evolved and spread around the world,” Tarbet said. “I’ve worked with infectious diseases for 25 years, and this is probably the fourth or fifth time that I’ve been involved with an emerging disease, developing vaccines, developing models to test treatments, but none of them have spread this rapidly….It’s almost daily that we’re seeing big changes and almost daily that discoveries are made, but there are still many things we don’t know the answers to, so we’re working as quickly as we can.”

Tarbet’s experience also makes him certain there will be future pandemics, many of them likely to start in animals. He teaches a “One Health” course examining how people, animals, and their environments are all part of the same system and said we need greater understanding of how diseases spread.

“In the past 30 years, 70 percent of new and emerging diseases in humans have come from animals,” he said. “And 50 percent of physicians say they could not diagnose a zoonotic illness because it’s an animal disease.”

Hurst said, “We have learned a lot in a very short time, but we still have work to do to develop a successful treatment or vaccine. We don’t have a miracle cure or way to prevent the spread wearing masks, and increasing hygiene procedures. Many of us have grown tired of the repetitive nature of these tasks and the limitations on our activities so we become lax in our approach. Our social patience has worn out even though the virus is still spreading.”

Hurst said the public is also getting an opportunity to see science in new ways because typically when research was published, experiments had been refined and repeated and papers don’t cover all the failed experiments and problems.

“I think people have to adjust to the realities of science and that it’s not all as neat and pretty as it looks when a paper is published,” Hurst said. “There are a lot of speed bumps along the way.