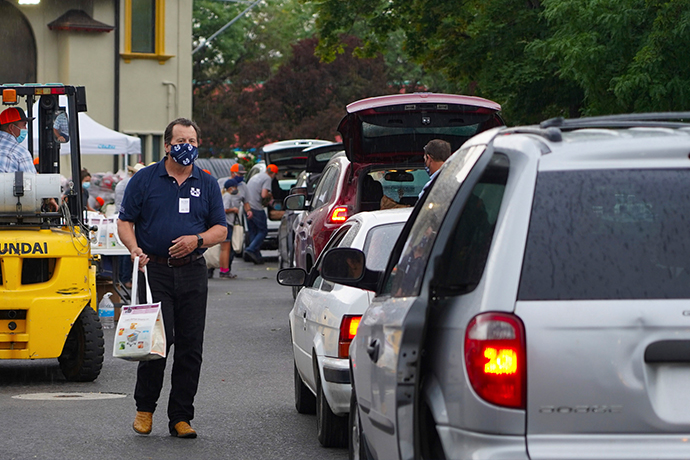 Learn more about Farmers Feeding Utah and donate on their website

Early casualties of COVID-19 included the nation’s food supply chain and wages for countless people when work hours were cut back substantially or ended altogether, amplifying existing food insecurity problems and creating new ones. But the Utah Farm Bureau Federation, Utah State University’s Hunger Solutions Institute, and combined efforts of donors and volunteers, managed to pull off “miracles” to help struggling Utahns on both ends of the food supply chain.

Even before COVID-19 blanketed the world, Utah farmers and ranchers had been suffering through a 5-year price slump. All the usual suspects were in play – droughts, tariffs, fires, tight labor supplies, and the ironic problem of being “too good” at producing food that the price reflects that of a readily available commodity, rather than a life-sustaining necessity.

Mix in a global pandemic, and you have a broken food supply chain in which farmers and ranchers lost markets for their products overnight because restaurants were shuttered, schools and their cafeterias closed, cruise ships remained docked, and few were spending extra dollars on higher-end food products. In areas of our country that were further into the harvest, this led to crops being plowed into their fields or being left unharvested, milk being dumped, and more. In the midst of all this, Utah was seeing family farms go out of business, not because of reduced demand, but because of the fragile supply chain.

“This really hit me, and I started wondering about how we could help our farmers,” said Ron Gibson, president of the Utah Farm Bureau Federation (UFBF). “It wasn’t long into this crisis that I was talking about these issues on the Rod Arquette radio show, and after the interview, I got a call from a listener from South Jordan, Utah. He wasn’t a farmer. He had zero connections to agriculture beyond eating food. But he told me that he and his wife wanted to help Utah’s farmers and ranchers and wondered about creating a GoFundMe account to help them. Tears filled my eyes as I heard his offer of help. I was truly touched that someone who doesn’t know me would reach out and try to help.”

Gibson continued to think about the offer and what would work for Utah farmers and ranchers, thinking there had to be some way to help. He appreciated the thoughtful question but wasn’t sure if farmers and ranchers would accept the help. But an idea was planted, and soon Gibson connected the goals of helping farm families and people in need of food through the Miracle of Agriculture Foundation, UFBF’s charitable arm: collect donations and use the funds to purchase food from Utah producers and get it to people struggling to feed themselves and their families.

USU’s Hunger Solutions Institute brings together research, Extension’s connections to communities throughout the state, and hunger-relief organizations. Led by Heidi LeBlanc, Extension professor in the Department of Nutrition, Dietetics and Food Sciences, the institute is an important part of Farmers Feeding Utah because its Create Better Health (SNAP-Ed) programs are closely connected with people throughout the state who are experiencing food insecurity.

LeBlanc and her colleagues were on board when Farmers Feeding Utah announced its first “Miracle Project” would be in Southeastern Utah in response to the Navajo Nation having been a hot spot of COVID-19 infection and people there experiencing over 90 percent unemployment as tourism-industry jobs in the area vanished. More than delivering packaged food though, the first project centered on delivering sheep to area families. The first delivery included frozen lamb and flour milled from wheat grown in San Juan County, and later the sheep arrived.

On the morning of May 25, Navajo community members came in trucks and SUV’s with trailers to Montezuma Creek—a community just east of Bluff, Utah—in a line that stretched for miles to receive sheep and flour. Recipients were selected based on need, with special consideration going to people with disabilities, single-parent families, veterans, and tribal elders. They came wearing masks and remained in their cars while the food and animals were loaded on the warm, early summer day. The sheep delivered that day benefited families in Aneth, Red Mesa, and Tódahadekanii. More sheep were purchased from ranchers in central Utah a week later and delivered to residents in Halchita, Navajo Mountain, and Oljató/Monument Valley. 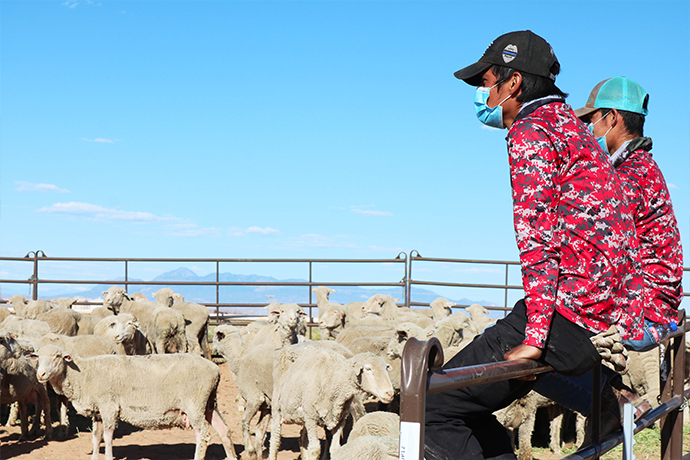 The project’s success was aided by the involvement and coordination efforts of Rebecca Benally, a former San Juan County commissioner, educator, and community member of the Navajo Nation in Montezuma Creek.

“Because of COVID-19, some people were on lockdown quarantine and they felt lonely and depressed and that maybe no one was thinking about them,” Benally said. “With these sheep, people told me it had given them hope and [let] them know someone cared about them. Sheep are very symbolic of hope and prosperity. You saw people here very happy to get sheep, and they utilized every bit of the sheep to give them hope. You can give a Navajo woman diamonds or jewels, and that’s nice. But if you really want to give something meaningful, you give sheep.”

Through three deliveries in the area, Farmers Feeding Utah—aided by additional support from The Church of Jesus Christ of Latter-day Saints and the Utah Department of Agriculture and Food—provided 600 live sheep, 16,000 pounds of frozen lamb, and 10,000 pounds of Utah flour.

North for a Second Miracle

As unemployment rates in Cache County rose to more than double the number from the same month the previous year and more people sought help at the Cache Food Pantry, two important annual food drives had to be canceled due to the pandemic. Requests for help from food pantries in Box Elder and Rich counties were also up by 30 percent.

On June 23, Farmers Feeding Utah brought its second “Miracle Project” to Logan, thanks to more grassroots donations and products from Farm Bureau Financial Services, Idaho Farm Bureau, Dairy West, and Oakdell Eggs. A team of UFBF members, USU faculty, staff, and students masked up and spent the morning organizing food bundles and loading potatoes, milk, cheese, eggs, and meat into the trunks and back seats of a line-up of vehicles that sometimes stretched the length of the Maverik Stadium parking lot. In all, the food went to more than 400 families and more was donated to area food pantries. 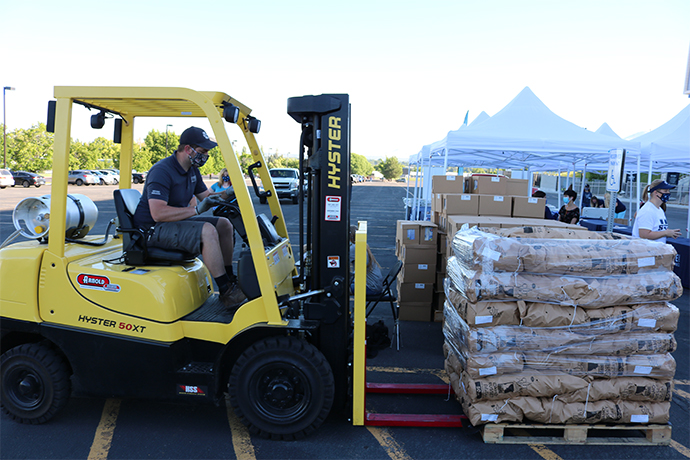 “As the land-grant university that is proud to count so many farmers and ranchers as alumni, I can think of no better way to help them during this difficult time—and help needy families as well—than what this program has been doing,” said USU President Noelle E. Cockett. “I’m proud to have our Hunger Solutions Institute and Extension play such a significant role in helping individuals and families in Utah, including our own students, get the food they need.”

On to Salt Lake City and Ogden

Donations to the project in amounts large and small continued as increased needs for food assistance persisted. In July, USU’s Hunger Solutions Institute identified other high-need populations using zip codes of people who had recently applied for SNAP benefits, data the institute receives to direct USU Extension education resources to people enrolled in the program.

Le Blanc said communities in certain zip codes in west Salt Lake City and West Valley City were among the hardest hit by the pandemic, and 15,000 people in the area signed-up for SNAP between January and March. A third Miracle Project served food pantries and families in the area with another drive-thru distribution operation at the Utah State Fair Park.

The real miracle may have been what happened following the SLC event when LeBlanc started making phone calls to see what could be done with food that was left when the distribution event ended. The Salvation Army in Ogden had prepared to distribute food that week, but a burglary left the organization missing some computers and all the goods that had been in the food pantry. Farmers Feeding Utah organizers and volunteers headed north with a semi-trailer loaded with meat, dairy products and produce purchased from farmers who were still having difficulties getting their products to market, and restocked the Salvation Army food pantry just in time for its distribution day.

On September 25, Farmers Feeding Utah was in Vernal to serve people in the Uintah Basin. An estimated 200+ families received meat, fresh fruit, and vegetables and a nearly equal quantity was donated to the Ashley Valley Food Pantry. As the pandemic continues to impact lives across the state and donors continue to support this important work, Farmers Feeding Utah will be a link connecting parts of Utah’s food chain.