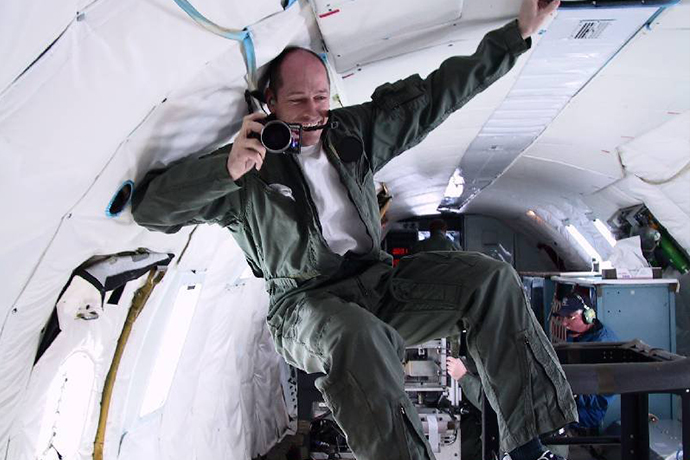 When Ray Wheeler arrived in Utah to do graduate work in plant ecology, he had a fascination with plants, a love of science and discovery, and no aspirations to be part of the U.S. space program.

“But when I got to Utah State, Professor Frank Salisbury had research funding from NASA and I became involved in that,” Wheeler said. “I stayed with that work all through my graduate program and it introduced me to NASA and the space research community.”

Wheeler is one of several USU College of Agriculture and Applied Sciences’ alumni whose careers include plants and aerospace. An internet search of Wheeler’s name turns up a long list of articles about growing food in space, including a NASA publication, A Researcher’s Guide to: Plant Science, about growing plants aboard the International Space Station (ISS). He co-authored the guide with NASA principal investigator Gary Stutte, and research scientist Oscar Monje, a USU alumnus who earned a bachelor’s degree in chemistry, followed by masters and doctoral degrees in crop physiology with Professor Bruce Bugbee.

Wheeler has been a plant physiologist at the Kennedy Space Center since 1988, long enough to have seen advances made, failures happen, priorities and administrations change, and to observe how technologies from NASA research have become part of life on Earth.

“There is intrinsic value in discovering new things through basic research,” Wheeler said. “I came to appreciate the value of how findings from basic research are a product to give society and the scientific community…there are controlled environment agriculture questions that we are asking that transfer to terrestrial applications.”

For example, some of Wheeler’s early work included experiments with plants grown hydroponically (grown without soil and with roots in nutrient solutions). Hydroponics is common in commercial production of some foods, like tomatoes that have been in grocery stores for decades, but Wheeler’s research included root crops like potatoes, sweet potatoes, and peanuts. Tubers did not develop well when submerged, but when potatoes were grown in containers on a thin film of nutrient solution, they thrived.

“So you lift the tray lid and pick potatoes that are nice and clean,” Wheeler said. “No soil to clean off or transport. It has caught on with seed potato growers, but who’d have thought NASA would develop something to use like that?”

Keeping plant roots bathed in fluids on Earth is one thing, but fluids don’t behave the same way in space. On the ISS everything is weightless as the spacecraft and everything aboard are constantly free falling in orbit. And in planning for missions to the moon and Mars, scientists must account for how solutions will behave when there is less gravity than governs their behavior on Earth.

Some of what we know about irrigating plants in reduced gravity comes from USU researchers’ experiments aboard the ISS and NASA’s now-retired research aircraft, the KC-135A. The plane was a laboratory for studying weightlessness, flying a rollercoaster-like path, climbing and diving to give passengers and their experiments about 25 seconds of weightlessness during each 65-second parabola, and repeated 40-60 times during each flight. The sensation of weightlessness, followed by the pressure of double the Earth’s gravity during the climbs, earned the plane its nickname: the Vomit Comet.

USU Professor Scott Jones, experienced more than 300 parabolas with experiments he worked on as a graduate student with emeritus professor Gail Bingham and soil physicist, Professor Dani Or, who preceded Jones on the faculty of the Department of Plants, Soils and Climate. 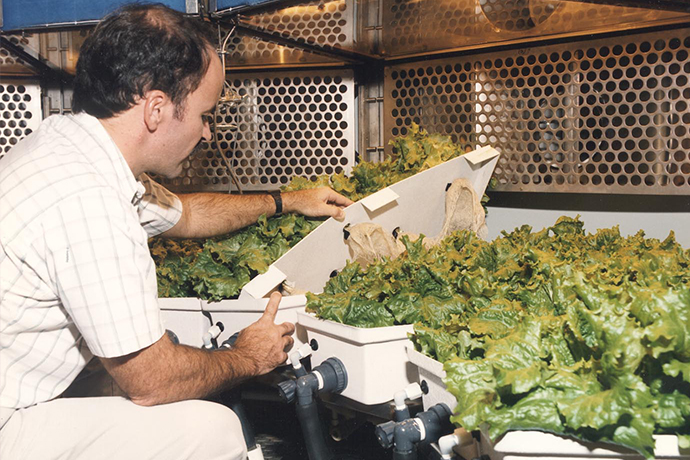 Bingham, who graduated from USU and earned a Ph.D. at Cornell University, used his knowledge of atmospheric physics to link climate work on this planet with creating growth chambers aboard spacecraft. Jones was a graduate student and part of a diverse team Bingham assembled at USU’s Space Dynamics Laboratory. They worked on measuring carbon dioxide and other elements in the atmosphere of plant growth chambers and studied how liquids moved through material that held the plants’ roots.

Managing liquids in space is not a trivial matter. It is critical in keeping plant roots healthy and edible leaves and fruits growing. Some of the sensors Jones and others now use to measure how water moves through soils on Earth are the result of experiments Bingham’s group did aboard the Vomit Comet, even (or especially) when they didn’t work as planned.

“We had some small experiments and naïve ideas about how they would work,” Jones said. “We injected water into small containers of a media for growing plants and had cameras and sensors to see how it moved. After the first couple of parabolas we figured out it wasn’t going to work, but we were set to fly and collect data the rest of the week. We sat down that night and had to figure out what we could do.”

Scientists routinely go back to the drawing board when things in the lab don’t work, but there is usually more time to devise alternatives because they don’t have a week of valuable flight time scheduled. That first experience was valuable because they learned from the failure. Later, three more weeks of flight experiences helped refine the creation of hardware and experiments that were conducted by ISS and Russian Mir space station crews.

While sophisticated and small “space greenhouses” were being refined at SDL, Monje worked in Bugbee’s lab developing crops for space flight, including USU-Apogee wheat, the first crop developed specifically to grow in space with constant light, no soil, short time to maturity, and only half the height of wheat typically grown on Earth.

Monje was a post-doctoral fellow in Bingham’s lab when he was hired by a NASA contractor at the Kennedy Space Center as a scientist on the Photosynthesis Experiment and System Testing Operations (PESTO) experiment.

“PESTO’s goal was to study the effects of microgravity on photosynthesis and metabolism in Apogee wheat plants, so it’s like I was made for the job,” Monje said. “All the experiments I had been involved with up to then were shuttle experiments, so they were limited to a week or 11 days maximum. The PESTO mission was the first spaceflight plant experiment on the ISS and took 73 days. It was exciting, but you do run out of adrenaline after the first couple of weeks.”

That 73-day mission will seem quick by comparison to a Mars mission though, and that means crews will need to produce some of their own food. Food processed to for long duration storage doesn’t retain its qualities and nutrients lose their potency.

“People who work on food systems recognize that we are going to supplement crew diets with fresh foods, salad crops,” Monje said. “Crews won’t get all their calories from salads, but they’ll get important vitamins and other nutrients. And when you get them in a non-pill form, those nutrients are more bioavailable because we have evolved for eating them.” 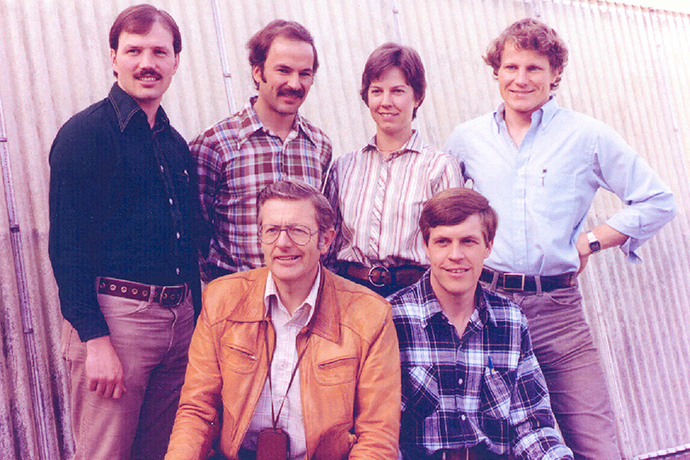 Wheeler said scientists have a sort of “shopping list” devised by NASA dietitians that focuses on some specific needs. Monje said beyond lettuce, kale would provide vitamin K, and crews may want something like tomatoes, peppers, or microgreens that taste like wasabi to perk up what could be an otherwise bland diet.

“We won’t grow wheat or rice on spacecraft because it needs too much preparation, threshing or dehusking, and cooking,” Monje said. “There’s not enough room to do that until you get to Mars or the moon.”

“Living on the station, with all those hard surfaces, is like living long-term in an elevator,” Monje said. “Think of that all the way to Mars and back, and imagine then there is a window to a small compartment full of bright light and growing plants and earthy smells.” 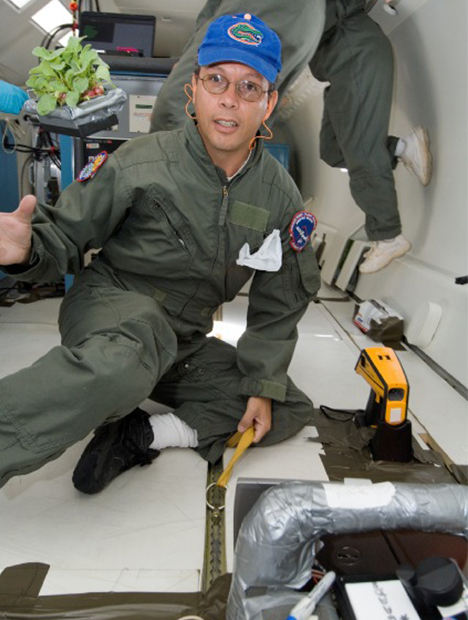 Oscar Monje has been fascinated by space exploration since he was a child, so in addition to taking his required classes and being a student researcher at USU, he was part of the Get Away Special (GAS) team, a group of students who designed and built small experiments that flew aboard space shuttles. Most team members were engineering or physics majors, but that never dissuaded Monje.

“I couldn’t do orbital mechanics or design trusses, but I could figure out payloads, figure out what we needed to measure, what data to gather, what sensors we needed,” he said. “I was always the plant guy working with the physicists and engineers. Then I came to the Kennedy Space Center (KSC) and I was the plant guy who could work easily with engineers. In the GAS program I learned to do electronics, how to get parts machined, how to integrate a payload, how to fail. Failure is an important part of science. Here we say we ‘fail forward.’ You’ve got to learn from what didn’t work, learn why it didn’t work, and keep moving forward.”

An early success though, fortified Monje’s dream of working in aerospace research. Members of USU’s GAS team traveled to the Kennedy Space Center in September 1994, to see the launch of the space shuttle Discovery that carried the team’s experiments. Monje contacted scientists from the KSC life science support contract before the trip, hoping for an opportunity to tour their labs. Instead, he got an invitation.

“I gave a presentation about what we were doing in Bruce’s (USU Crop Physiology) lab, as well as my GAS experiment, to the NASA scientists at KSC!” Monje said. “Ray Wheeler and other scientists were there and I got feedback from them about my work from their perspective. Working with Dr. Bugbee was amazing! Even now when I talk to other scientists, I learn that we had very nice ‘toys’ to use in our work and others didn’t have that same experience.”

As a student researcher, Monje learned that if he truly needed a specific piece of equipment he had to justify his request, but nearly always got it.

“Working at NASA is like that too,” he said. “You have access to incredible facilities and equipment to get the job done.”

As a student researcher, Monje learned that if he truly needed a specific piece of equipment he had to justify his request, but nearly always got it.

“Working at NASA is like that too,” he said. “You have access to incredible facilities and equipment to get the job done.”

While critics question whether exploring space is worth the investment, Monje observes that in addition to moving technologies forward that are also used on Earth, “…research money pays for people’s work, for their skills, for parts that have to be designed and built. It is invested here. There’s no bank in space.”