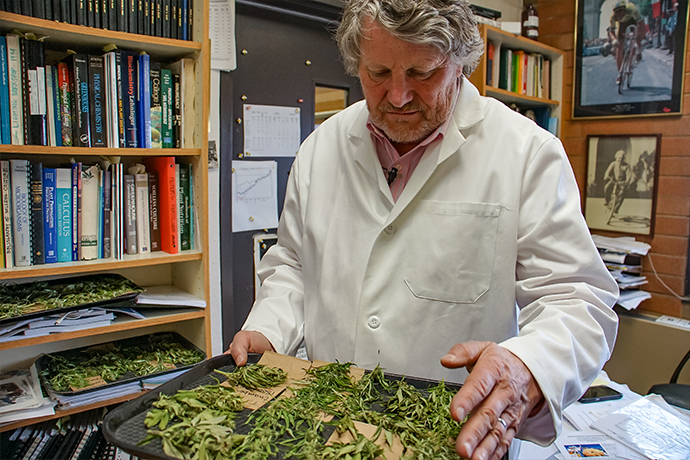 Scientists at Utah State University are studying various growing practices to optimize the yield and quality of hemp for botanical medicines.

Professor Bruce Bugbee, who specializes in the use of controlled environments like growth chambers and greenhouses, leads the research project. Bugbee obtained permits to grow hemp from the Utah Department of Agriculture and Food and began the studies under LED lights in controlled chambers in February. Rooted hemp cuttings of federally approved low-tetrahydrocannabinol (THC less than 0.3%) cultivars of Cannabis sativa were provided by growers in Colorado and Kentucky. Pineae Greenhouses in Ogden, Utah, provided growing media and additional support for the research.

“The 2018 Farm Bill legalized the cultivation of hemp, and it makes sense for USU to be involved in this research, just as we have done with crops for more than 130 years,” said Ken White, Dean of USU’s College of Agriculture and Applied Sciences. “It is a potentially important crop for Utah growers, and our mission as a land-grant university is to do research that helps people in agriculture.”

Bugbee said there are multiple goals for the research, but the primary focus is on the genetics and environmental conditions that produce cannabis flowers with high cannabidiol (CBD) and very low THC content. The Farm Bill defines hemp as cannabis that has less than 0.3 percent THC, the psychoactive compound that makes people intoxicated. It is not possible to become intoxicated from the hemp/cannabis cultivars being used in this research, Bugbee added.

Flowers, leaves, and stems are being harvested at regular intervals, and Professor Bill Doucette, an environmental chemist in USU’s Department of Civil and Environmental Engineering, is extracting and analyzing the tissues to characterize the cannabinoids. “A central goal is to determine the effect of plant growth stage and environmental conditions on CBD and THC concentrations,” Doucette said.

The professors and their student research assistants will optimize the growth of the plants, extract and characterize the cannabinoids, and make CBD oil. They are also exploring collaboration with the University of Utah’s College of Pharmacy. Professor Karen Wilcox, chair of the U’s Department of Pharmacology and Toxicology, already studies cannabinoids and labs there are accustomed to protocols for working with compounds from cannabis, including in treatments for seizure disorders such as epilepsy.