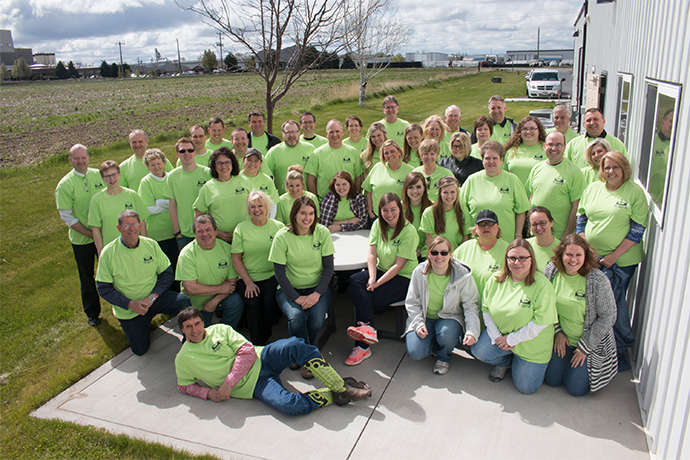 Progressive Publishing is well-known in the realm of agricultural producers for its personal stories and useful, innovative information. Primarily focused on dairy, beef, and forage, Progressive publishes six magazines in multiple languages for readers in farming communities in the United States and Canada. These publications came to fruition over years of labor and innovation by Leon Leavitt, his family, and his team.

Leon was raised on a dairy farm in western Idaho and graduated in dairy science from Utah State University. While a student in Logan, he met his wife Jane, a fellow Idahoan who had grown up in Blackfoot and was studying speech pathology at USU. The two Aggies married in 1966 in Idaho Falls. After graduation, they stayed in Cache Valley and Leon worked out of Richmond as a field man for the Pet Milk Company. After three years of learning the business and getting to know area farmers, Leon returned to USU for graduate school. Just three months later, he accepted a position as head field man for Carnation de Mexico, S.A. which had two evaporated milk plants and ten receiving stations in Mexico. He worked doing dairy farm inspections, balancing dairy rations, improving management practices, and teaching artificial insemination.

“Over the next few years I made my way back to the United States,” he said. “I added experience to my resumé which included working with family on an expanded dairy operation, becoming a dairy equipment dealer, a sales representative for Carnation Genetics, and even designing and installing cabinets.”

In March 1985, Leon opened Idaho for Advo Systems, a direct-mail marketing company, where he learned sales and ad design. Two years later, Leavitt came across a new publication with subject matter that was very familiar to him.

He related, “One day in March 1987, I stopped in to see my friend and neighbor Dr. Bruce Bradley at Northwest Labs in Jerome, Idaho. We had participated together with our boys in various scouting activities and had talked about working together to expand his company’s exposure. When I opened the door to his office he had the first issue of The Progressive Dairyman, an eight-page flyer, in his hand that was ready to be circulated to his clientele. He had just received the copies from the printer and felt like it needed improvement.”

Leon quickly contracted to improve the project along with Bradley’s wife, JoAnn, who was the editor of the original publication. Dr. Bradley’s business partner, Bob Whitchurch, was a well-known dairy nutritionist, and Whitchurch’s wife, Sharon, kept the books for the publication and was responsible for circulation.

“Together with those two gals, we met our monthly printing deadlines,” Leon said. “I started contacting potential advertisers, several of which are still with us, and our next two issues were 16 pages in length.”

In July 1987, he made the transition from a typewriter by selling a few calves to purchase an early model Apple computer, a 9-inch Macintosh SE. By 1990, the publication had grown to two versions, 40-pages in length, and had a circulation that reached people in 10 western states. The next year, Leon put funds together and through a mutually accepted and congenial agreement, bought out both his business partners and moved the equipment from Northwest Labs into the basement of his home. Leon’s wife, Jane, became the editor, teenage daughters Laura and Carolyn managed circulation lists, and younger son Bryan became a proficient ad designer.

Over time, Leon and his team expanded the company with new employees including his sons Alan and Glen, graduates of Utah State University and Brigham Young University, respectively. They invested in an imagesetter, which allowed them to make printer-ready negative film that met printer specifications.

“A colleague in the printing industry counseled me to always get the best equipment you can to do the job because, in the end, it will make you money, not cost you,” Leon said. “Our first digital camera cost us $995 in 1991. It only had black and white capability with a pixel density of 1.5 megapixels, but it certainly was an improvement over the conventional film cameras. We didn’t need color back then because it wasn’t required.”

Leon was always looking for ways to innovate and make the creation and publication process more efficient. In October 2004, when few companies had seen the potential of the internet, Progressive Publishing created a website for its publications (progressivepublish.com). Of course, now a flood of information is available to people everywhere, so what is it that continues to make Progressive’s offerings a recognizable and important voice in the agriculture industry?

Alan Leavitt explained, “One of the business models we follow is to provide readers with real-life, bottom-line-enhancing information, that is unbiased and not sales-driven. Time is our most precious commodity, and farmers are extremely busy. They highly value the timely information we provide them either in print or digitally (or both), and they are a loyal group. Trying to treat them and everyone in the industry as we want to be treated (the Golden Rule) has served us well. It is a win-win-win-win relationship between our readers, advertisers, the industry in general, and ourselves when we focus on that.”

In 2005, the company moved into its current facility in Jerome, Idaho. Two years later, Leon became publisher emeritus, officially retired from the company, and sold the business to Alan and Glen, who learned a lot about running the company from their dad and his leadership style.

“Leon’s leadership style is one of humility, compassion, trust, leading by example, and not being afraid to do things differently or to think outside the box,” Alan said. “Fostering a family- and faith-focused working atmosphere and hiring exceptional people who excel in their own fields has led to very little turnover and long-tenured employees.”

Progressive Publishing currently employs over 40 people (many of whom are fellow Aggies), publishes six agriculture magazines with a monthly circulation of more than 93,000 readers, and covers all of the United States and Canada.

Alan said expanding Progressive Dairy into Canada happened naturally, as there are many commonalities between the two countries as far as milk production goes. Since and the province of Quebec is primarily French-speaking, providing a publication in French also seemed like a good business decision.

Leon said he feels blessed to be associated with agriculture and the dairy industry and that the key ingredients to his success are basic principles of absolute honesty, adhering to the Golden Rule, serving customers well, and advises surrounding yourself with people who are more qualified at their jobs than you are.

“I give credit to God, my family, great employees, faith-based values, hard work, and being blessed to live in such a great country. We’ve been doing this for many years and it’s been an incredible journey. I have been in awe of how rapidly it has grown. I could not have done any of this without the support of our children and my wife, Jane. She’s the backbone of it all. Alan and Glen have taken the business to new heights by surrounding themselves with highly motivated and dedicated people.”

Since Leon took on emeritus status, he and Jane have been on three missions for their church—once in Chile and twice in the Dominican Republic—even though it meant being away from their six children and 28 grandchildren. They are now enjoying what they refer to as their fourth mission, the “Leavitt Family Mission,” and spending as much time as they can with their family. 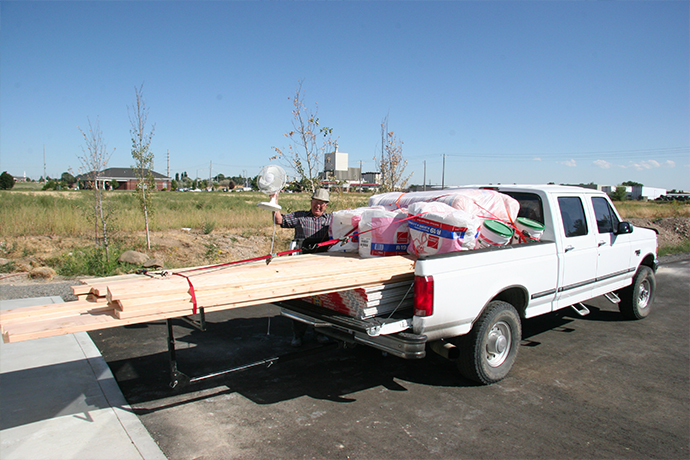 Leon Leavitt during construction of the company's current home. 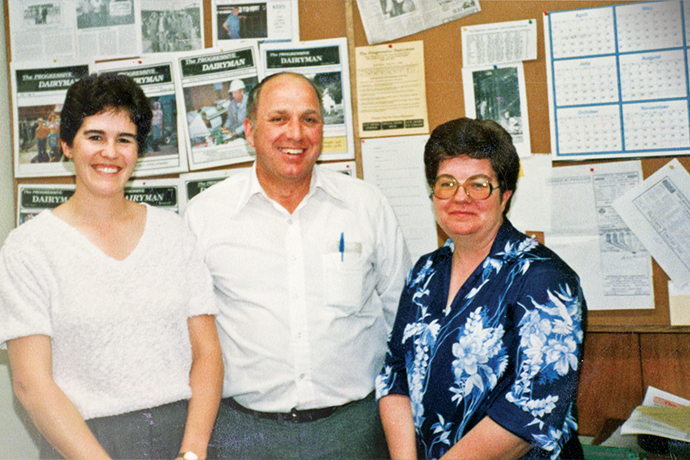 A family friendly company culture at Progressive Publishing has helped build a team of long-time employees.