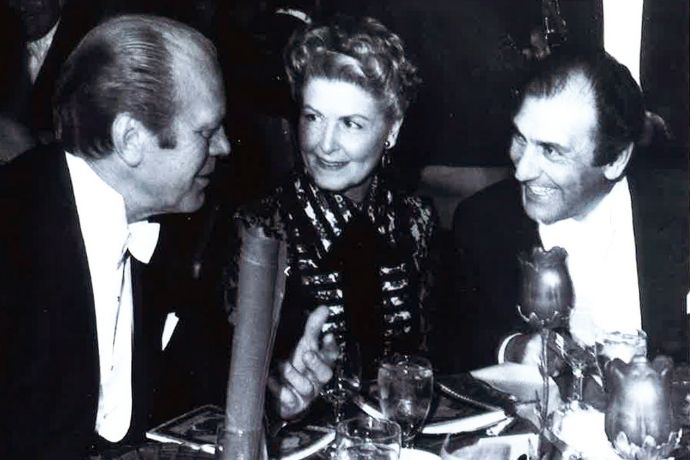 Notable Utah State University alumnus and donor, Ardeshir Zahedi, died on November 18, 2021, at his home in Switzerland. He was 93.

Globally celebrated as a lifelong champion of world peace and understanding, Zahedi had a hand in shaping more than three decades of geopolitical history (story on page 18 of Cultivate Fall/Winter 2014). Twice he served as Iran’s ambassador to the United States.

“Ardeshir has had an incredible impact on global peace throughout his lifetime,” said USU President Noelle E. Cockett. “He reached across the world and made a difference. We will be forever grateful for his foresight and humility, as well as his generosity to USU.”

Zahedi’s widely respected and far-reaching influence and diplomacy were also hallmarks of his service as ambassador to the United Kingdom’s Court of St. James, Iran’s foreign minister, and head of the Iranian delegation to the United Nations General Assembly. He worked closely with seven U.S. presidents, entertained countless iconic artists and celebrities, and yet once proclaimed, “I was born at Utah State University.”

“Ardeshir Zahedi is probably the most internationally distinguished graduate of Utah State University and he truly loved this university and Cache Valley,” said Ken White, dean of the College of Agriculture and Applied Sciences. “He was a remarkable man and he credited Utah State and his experiences here as the start of many good things that happened in his life. We are grateful for his love and support. His compassionate deeds will live on after him and I hope that generations of students who experience his generosity through his endowment will appreciate his generous spirit and the extraordinary life that it represents.

After leaving his home in Iran to study at Utah State University in 1947, Zahedi later graduated in 1950 with a bachelor’s in animal science. He then returned to tumultuous times in Iran, where he shaped the country’s modern political history while serving as an aid to his father, the prime minister, and as adviser, confidant, son-in-law, and friend to the last Shah of Iran. His maternal grandfather served as the first prime minister of Iran. He received important honors from his home country and governments around the world and honorary degrees from 11 universities, including doctor of law and humanities from Utah State University.

After graduating, Zahedi’s deeply held feelings and support for USU remained constant. He gave back to the university in numerous ways, including creating the Ambassador Ardeshir Zahedi International Endowment in the College of Agriculture and Applied Sciences, and contributing to various additional scholarships across the university. He was inducted into the College of Agriculture and Applied Sciences Alumni Hall of Honor in July 2002, received a Distinguished Service Award from the USU Alumni Association in 2007. To honor his generosity to the college and impact on the world, the Ambassador Ardeshir Zahedi Atrium was designated in USU’s Agricultural Sciences Building, where a portrait and story of his work are displayed.

“Seeing his portrait in the atrium reminds us that many people around the world know the headlines about the glamourous parts of his life, but the remarkable thing to us is not that he withstood monumental upheavals and challenges, it's that he emerged from them with his generous spirit and concern for humanity around the world intact,” White said. “His attachment to USU after so many decades reminds us that the things that happen for our students while they are on our wonderful campus might result in outsized impacts in the world. His portrait captures a nobility that isn't just the result of a family's position or wealth, it's an attribute of his incredible character.

“In the nine years that I have known him, he has been much more than a donor, he has become a dear friend,” White added. “But he was like that with everyone. He was like a magnet who just drew people to him, and they went away feeling better and buoyed up from spending time with him.” 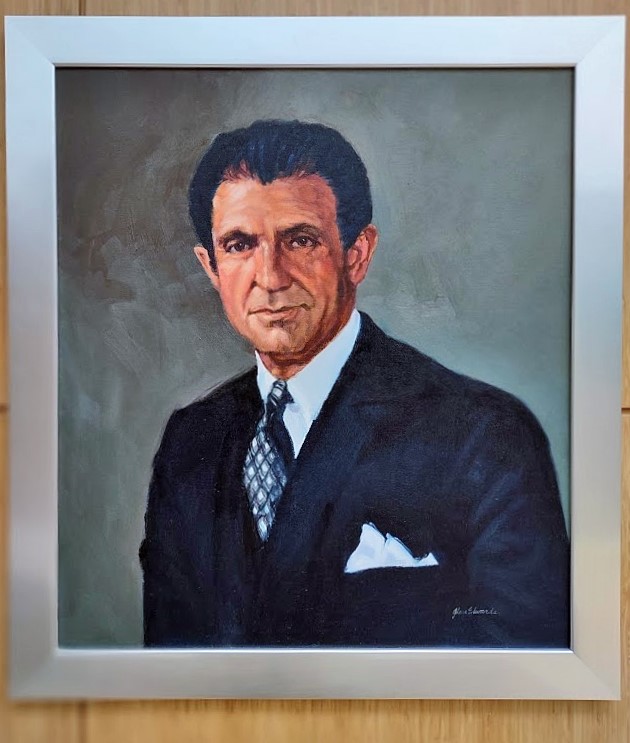