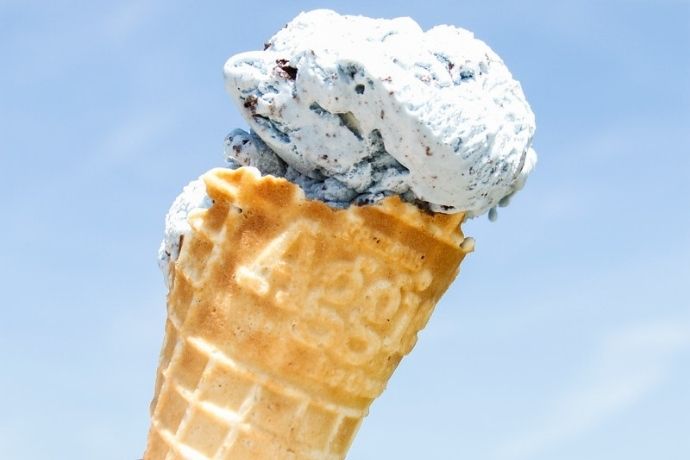 The Aggie Creamery participated in Day on the Quad during the first week of fall semester 2004, scooping free Aggie ice cream for students and, along with Whitney Wilkinson from USU Public Relations and Marketing, we organized a Design an Ice Cream competition and invited students to submit ideas for new flavors.

The next step was assigning food science students in the dairy technology and processing class that I taught, to come up with prototypes of the top suggested flavors. As part of this course, students learn of technologies used in the dairy foods industry to convert milk into a variety of products, and the laboratory segment on freezing and making ice cream is always popular. Part of the learning process is to source ingredients. That meant finding white chocolate pieces designed specifically for ice cream as regular white chocolate becomes too hard when used in ice cream. The white chocolate we use melts more at room temperature and we have to keep it in our -20°F freezer until it’s ready to be used. We had a good peppermint essence that we used in our Cookie Mint and Chocolate Chip Mint ice creams but we needed a blue coloring that didn’t look too much like bubble gum or candies that make your mouth blue.

My students found that pieces of white chocolate in the blue ice cream did not have enough contrast in color to be obvious. One of the great appeals of ice cream is that we enjoy contrasts in our food. Ice cream provides more contrasts than almost any other food: contrasts in color, texture (smooth ice cream versus crunchy chocolate, nuts, and cookies), temperature (cold ice cream versus hot fudge), and in taste (creamy sweet ice cream versus the added components).

To increase the contrasts in Aggie Iceberg, I suggested adding chocolate cookie pieces.

My students and others evaluated the ice creams, made some additional changes, and Steve Larsen (then our Aggie Creamery technical specialist) made enough of three of the recipes to invite other faculty, staff, and students to a taste-off. The highest scoring ice cream was blue mint with cookies and white chocolate. The three students who originally suggested the recipes were given the remaining buckets of their ice creams to enjoy with their family and friends.

With the addition of chocolate cookies, the concept of icebergs in a sea of blue mint ice cream no longer applied and it needed a new name. That same year we were working with USU Public Relations and Marketing (and an outside marketing firm) to update the label design for our half-gallon cartons of ice cream and to introduce single-serve cups. Part of this effort was to display the creamery’s heritage as one of the initial programs when Utah State University was founded in 1888 and its continuation since then. Whitney Wilkinson suggested the name “Aggie Blue Mint” and it became the first flavor to specifically call out its special association with USU. We have continued that tradition with other flavors developed by the creamery, including Aggie Bull Tracks, True Aggie Night, Aggie ROTC, and Aggie Space Debris. But, so far, Aggie Blue Mint remains the most popular flavor of Famous Aggie Ice Cream.