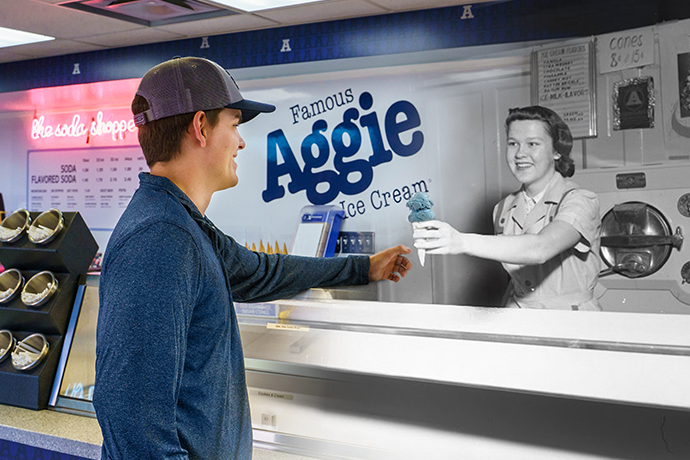 The year 2022 marks 100 years of business for Utah State University’s Aggie Creamery. To celebrate the centennial, the creamery is hosting a series of events as well as in-store and online monthly giveaways with prizes from local businesses. New limited flavors of ice cream plus several retro flavors will be available throughout the year to commemorate the anniversary.

Kicking off the centennial celebration is the Aggie Ice Cream Birthday Bash, held Friday, Jan. 21, from 11 a.m. to 9 p.m. at the Aggie Creamery, 750 North 1200 East in Logan. Enjoy $1 ice cream cones and the chance to win prizes.

The Aggie Creamery will give away three grand prizes in January: a one-year supply of free Aggie Ice Cream; a Beaver Mountain ski package (a pair of day passes and a $25 Beaver Bucks gift card); and an Aggie Staycation, which includes an overnight stay at a local hotel and $125 in Bluebird Chocolate. To enter to win, visit Aggie Ice Cream and scan the QR code found in-store.

Other prizes to be won in January include a movie night for a family of five; Eccles Ice Arena family passes; a one-month Sports Academy family pass; a Cache Valley Fun Park Day Pack for five people; and two Jump Zone passes that include two lanyards and two pairs of socks.

While now a division of the College of Agriculture and Applied Science’s Department of Nutrition, Dietetics, and Food Sciences, the Aggie Creamery began as an instructional ice cream production course in the basement of Old Main. With the growth of the college, the creamery evolved into a full-scale operation. Students used milk from the university’s dairy to make the ice cream, and it was sold to Aggies all over the world. Today, Aggie Ice Cream is available on campus, in stores, and online.

Look for other events, monthly giveaways, and more on the Aggie Creamery’s social media pages @aggieicecream.