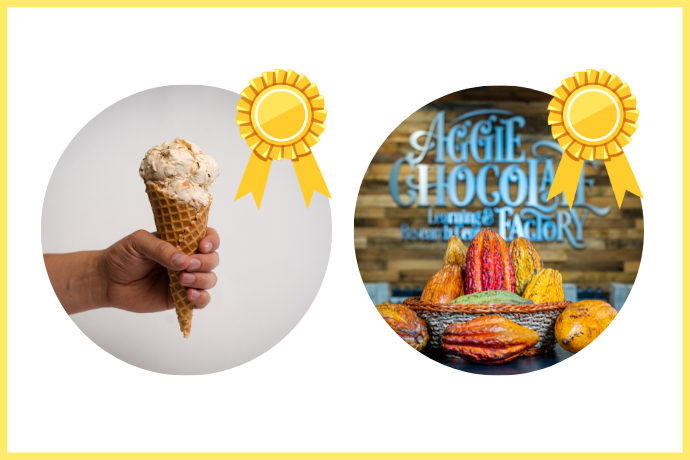 The Aggie Chocolate Factory and Aggie Creamery can add more accolades to their already impressive lists of awards. For the second year in a row, Aggie chocolate, ice cream, and specialty cheese have been awarded Best of State.

Utah’s Best of State Awards recognize organizations and businesses in Utah that are outstanding in their area of work. Awardees are recognized for achievements in their field of endeavor, including innovation or creativity in their approaches, techniques, methods or processes, and the contribution their business makes to the quality of life in Utah.

Over 100 judges review each nomination before casting their votes, and the business with the highest number of votes wins a Best of State medal. The categories Utah State’s College of Agriculture won in include “Ice Cream” for Aggie Ice Cream; “Specialty Cheeses” for the Aggie Creamery; and “Culinary Chocolate” for the Aggie Chocolate Factory.

Aggie Ice Cream, which celebrates its 100th birthday this year, offers more than 20 flavors and is lauded as both a campus tradition and local staple. With the addition of shipping options, Aggie Ice Cream can also be enjoyed across the country. To celebrate the centennial anniversary, new flavors and old favorites are also returning each month for a limited time, and Aggie Ice Cream fans can enter monthly drawings to win prizes from other local businesses.

The Aggie Creamery boasts the ability to produce cheese and ice cream from “cow to cone” with milk supplied from USU’s Caine Dairy. Both operations function as learning and research facilities where staff and students create delicious foods and pioneer new production techniques.

Popular cheeses produced at the creamery include Old Juniper, an aged cheddar cheese developed at Utah State in 2002; Crimson Trail, a cheddar cheese food with jalapenos developed by Professor C.A. Ernstrom in 1970 and named after a popular hiking trail; and Aggiano, a Parmesan-style cheese crafted by students and staff in 2003 and the most awarded cheese in the state.

The Aggie Chocolate Factory is the only bean-to-bar facility operated by an academic institution. It sources sustainably produced, fair trade beans from across the world, including a new supplier in the Dominican Republic. The factory offers free tasting tours to the public.

Because of The Aggie Chocolate Factory, hundreds of USU students have taken what they learned in the classroom and applied it to hands-on experiences with chocolate and state-of-the-art equipment. It also supports the confectionery industry by offering its expertise and facilities to established and start-up businesses alike. The facility serves as an important venue for short courses offered to confectioners across the United States and Canada.

The College of Agriculture and Applied Sciences’ three award-winning programs will be recognized at a gala held on May 26 at the Salt Palace in Salt Lake City. For further information, visit bestofstate.org.