Seven students sat in a conference room along with Dr. Kerry Rood, professor of veterinary medicine. However, this was not a class. The students talked among themselves, some about working with a bull at Utah State University’s South Farm facility, others about coming exams. Two listened to Rood explain why medicine classes tend to be more challenging than earlier courses.

“You go from the rote memorization of right and wrong to a gradation of good, better, and best,” said Rood. The students nodded in understanding.

The group had formed months earlier during Cougar Orientation and Leadership Experience (COLE), a weeklong event held annually and attended by all four schools in the WIMU Regional Program. Social events, trust-building activities, and even a rock-climbing wall help new veterinary medicine students bond before the semester begins. COLE has been a great success since it was created — but normally, it ends in August. 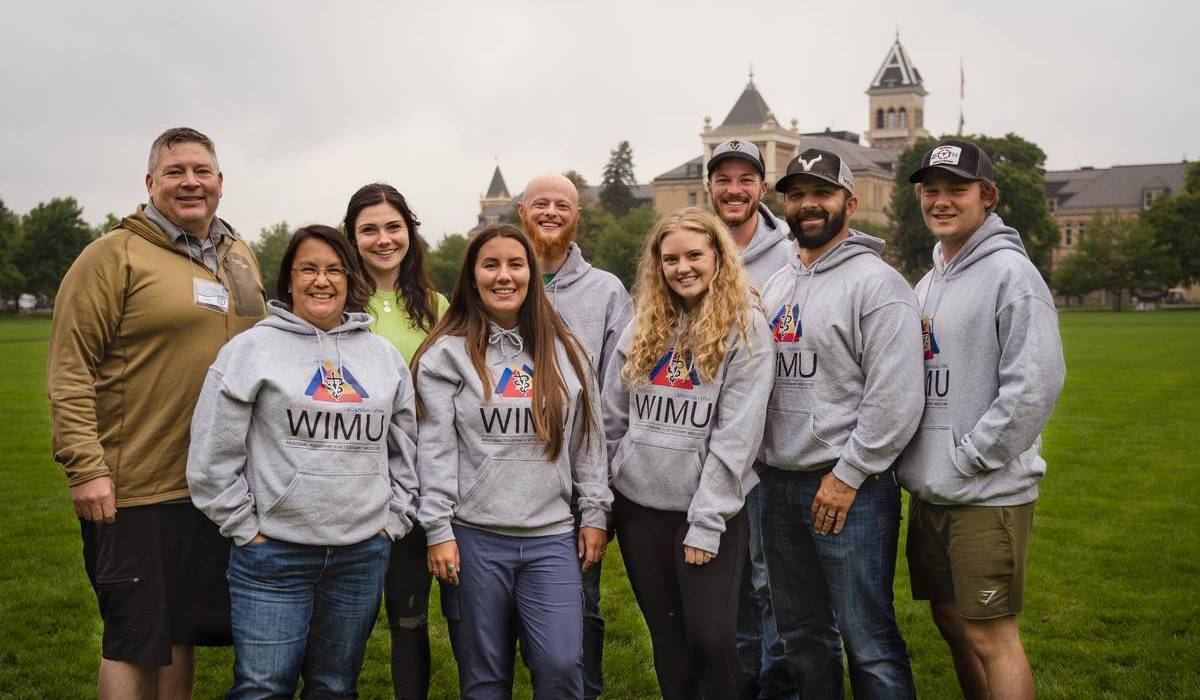 Rood and student mentor Liza Sperry wanted to build on what COLE had started. And by forging ahead with their group of first-year students, they convinced Utah State’s School of Veterinary Medicine to expand the program for future students starting next year.

The group meets about once a month. Lunch is provided, and while enrichment activities often make up part of the meeting, much of it is unstructured. Students trade advice and resources, share inside jokes, and commiserate about the challenges they face.

One of the first-years, Taylor Murdock, explained that having space to do these things allows students to reap the benefits of orientation all year long.

“There’s just so much information during that first week,” Murdock said. “There’s this new chapter of your life starting, and it’s a little overwhelming. You’re not listening to some things as well as you should, and maybe you’re focusing on things that don’t need as much focus. Being able to come back and touch on those things we learned in COLE and rehash them is helpful — it’s not just this one big dump of information anymore.”

That loss of information due to student overload is a big part of why Rood wanted to expand the program.

“Over the years, I've noticed many of the things learned at COLE are not reinforced, that students just go their own way afterward. And after the pandemic made us hold COLE in Logan instead of one of the other WIMU campuses, I had the idea to just keep our group going.”

Sperry, a second-year student and co-creator of the expanded COLE idea, helps classmates by offering veteran student perspective on the challenges they face. She pointed out that expanding the program has helped with more than just knowledge retention.

“It's been cool to see how much you all have bonded and brought out each other's strengths,” said Sperry to the first-years. “Our COLE was online with students from the other campuses because of the pandemic, and while the activities were great, they weren't nearly as beneficial as what you guys got to go through, and we didn’t get to form friendships. I'm jealous.”

Going forward, every COLE group will have monthly meetings with a faculty facilitator and peer mentors. Second-year students will drive the discussion, while the facilitator support both new students and mentors. The groups will discuss strategies for managing test anxiety, burnout prevention, communication, boundary setting, and more, although time will still be set aside to allow for more free-form discussion.

As far along as the new plans for the COLE program are, students and faculty alike continue to shape what it will look like. Even during Rood and Sperry’s COLE meeting, students spoke about what they hoped to see from the new program.

“I think they should talk about what COLE means,” said first-year Sydney Worley. “Like the collaboration that goes on in the program, and how it’s not a competition between us, but boosting each other up. Things like that.”