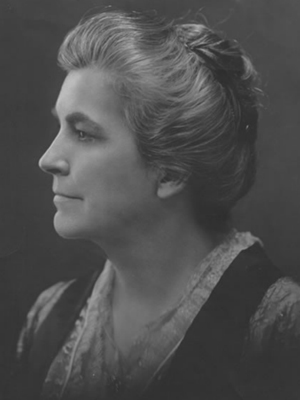 Abby L. Marlatt was on the first faculty of the Utah Agricultural College (UAC) and fostered study of the Domestic Sciences in a single, barely equipped room in the basement of the Main Building—as it was called then. She brought a strong scientific and academic base to the study of Home Economics. Marlatt saw the first graduate, Martha Hoyt, complete the BS degree in Domestic Arts in 1894. Then Marlatt was off to other appointments, including Dean of Home Economics at the University of Wisconsin, a program that she was invited to create. At the 50th anniversary of the founding of the university in 1938, she was awarded an Honorary Doctorate and delivered an address on “Problems in Family Relations.

The Domestic Arts was one of the original courses taught at the Utah Agricultural College, beginning in 1890 with Professor Abby Marlatt. With coursework devoted to preparing the homemaker, young women were taught cooking, sewing, dairying, hygiene, music and painting, French, and horticulture. In 1913, additional courses of study were made available in the field of Domestic Science as students were given the option of majoring in foods and dietetics, home sanitation and construction, and domestic art. In 1927, a home management house was completed to aid in the training of household operation. The areas of study in the domestic sciences continued to grow when, in 1931, a child development course was added and a nursery school built to train students in child techniques. Over the years, a subject area originally geared toward providing young women practical training in household operation has developed into several departments and programs that educate both men and women for careers in areas such as Human Development, Family Studies, Food Science, Nutrition, and Dietetics.