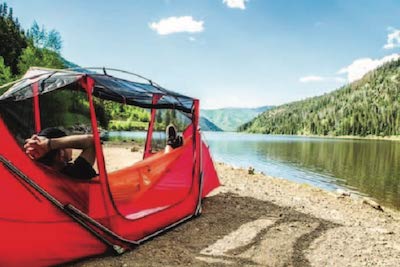 The ability to translate an idea to paper is difficult enough. To bring an idea to a finished product on the market is truly special. Utah outdoor startup, LIT Outdoors, did just that by raising over $175,000 on Kickstarter with the help of Outdoor Product Design and Development (OPDD) alum and product designer, Riley Hughes.

“I started working with Danny (CEO), Nick (engineer & CTO) and Abraham (writing and graphic design) in an internship role during the summer of 2018,” said Hughes. “Finally, in my senior year of college, I became more heavily involved in launching and managing our Kickstarter effort, while organizing and designing a tech pack to bring our vision to life.”

The Tammock, LIT Outdoors’ hammock tent, was the brainchild of University of Utah students Nick Bierwolf and Daniel Golfinger who were frustrated that they couldn’t camp in their hammocks in areas without trees or other supports to secure to.

“My role with LIT Outdoors as the product designer has involved finalizing a tech pack to send to manufacturers for our first production run. We’ve done over a year of product development and testing on prototypes to get the iteration that is slated for our first production run,” he said. “My co-worker Nick Bierwolf and I have collaborated on all aspects of the Tammock on both the design and development side. All of us have worn multiple hats and job roles to get LIT Outdoors where it is today. Being a part of a successful Kickstarter has been incredibly humbling seeing the validation of a brand new product. We’re grateful to have consumers invest in the Tammock and share our excitement for a brand new way to enjoy the outdoors.”

LIT Outdoors raised over $175,000 during the course of their Kickstarter campaign. Now with funds in hand, the company prepares to go to  productions with their innovative product that’s already grabbing the attention of the outdoor industry.

More info about LIT Outdoors can be found at their website https://www.litoutdoors.com/

Riley Hughes’  work can be found in his portfolio.