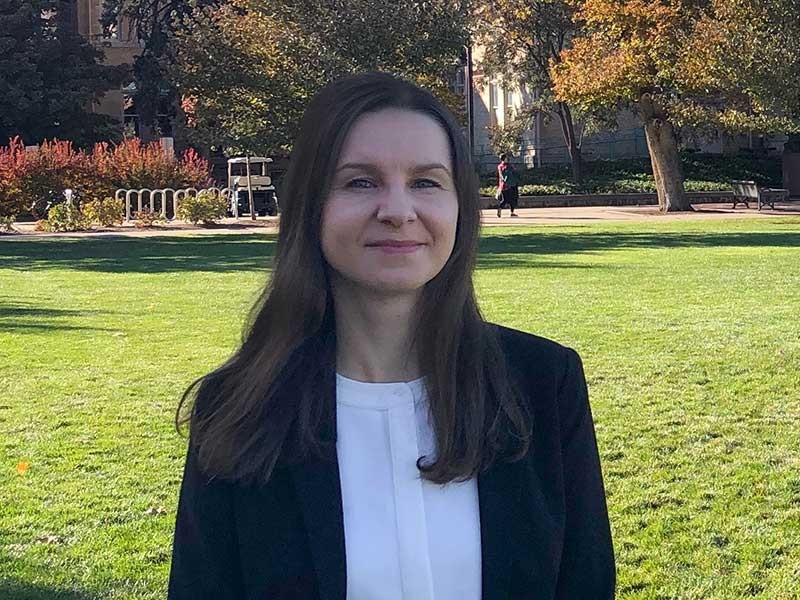 Tatiana Drugova, one of the USU Economists to be recognized

To earn her doctoral degree, Tatiana Drugova would ultimately travel halfway around the world and complete her graduate studies in field that was entirely new to her.

Drugova and her husband, Hamza Abdellaoui, began their Utah experience when he accepted a position working in Utah State University’s Department of Biological Engineering 2012. She came to realize that she wanted a more quantitative-based economic education, so in 2015, she enrolled in graduate studies in the agriculture and food marketing and consumer economics program in the Department of Applied Economics (APEC).

“I had no agricultural background before I came to USU,” Drugova said. “I had to start pretty much from scratch. I did my undergraduate focusing on tourism management, and I graduated in 2008 back in Slovakia.”

Drugova’s educational odyssey culminated in her doctoral dissertation on the organic wheat market. Since she received her doctorate in applied economics in May 2019, Drugova also won the Richardson-Applebaum Scholarship for best dissertation from the Food Distribution Research Society (FDRS).

The award-winning dissertation explores three sections of the organic wheat market: the profitability for producers compared to conventional wheat, the segmentation and understanding of consumers, and consumers’ willingness to pay.

“We need to eat, so I feel it's important that there are research economists that help farmers and food manufacturers to do work more efficiently and to produce the products that are actually required or demanded by consumers,” Drugova said.

Comparing organic to conventional wheat prices from 2008 to 2017, Drugova found that while organic prices were more volatile, the organic premium over the course of the entire study represented a higher profit margin for organic growers. As for consumers, Drugova revealed that organic bread was much more commonly purchased by many segments of society compared to desserts, such as cookies.

Respondents questioned during the course of her research reported that they perceived conventional cookies to be better than their organic counterparts, an effect that might be linked the overall perception of organic foods necessarily being health foods, according to Drugova. Most consumers polled also favored “non-GMO” labels to “organic” labels, even though organic requires a higher standard of regulation in addition to non-GMO status.

FDRS also recognized Kynda Curtis, a professor in the APEC department and Drugova’s faculty mentor, with the Frank Panyko Distinguished Service Award. At its annual conference in Seattle, Curtis was recognized for her outstanding leadership, generous service, and her long-term commitment to the society.

“I have taken student teams to the society’s student marketing competition 7-8 times,” Curtis said. “These teams have done well, placing in the top three with one exception, and coming in first with student members of the Agribusiness Club in 2014. I study behavioral change and adaptation/adoption related to food consumption, preferences for local, organic and other labelled food products, as well as producer adoption of production techniques.”

Drugova will continue her studies at USU as she completes postdoctoral research. She hopes to continue her research on consumer behavior and preferences, particularly as they impact agriculture and environmental economics.

“I want to say that I did not consider any other university other than USU because we have lived here for quite some time, and I really like Logan and the community here,” Drugova said. “There are many, many benefits. It was a blessing, definitely.”