From Graduation to Rural India – A Dietitian’s Dream 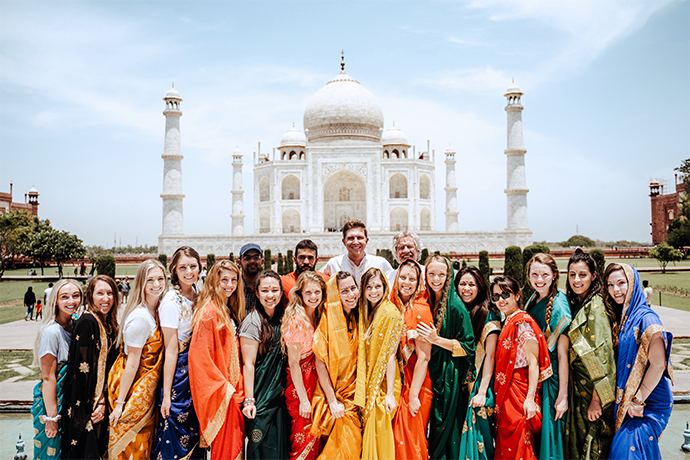 Utah State University seniors have opportunities to gain professional experience before graduation that prepares them for the careers that will follow graduation. For two USU dietetics students anxious to share important knowledge about food, launching a nonprofit organization in a country like India the summer after graduation, seemed like a dream they might realize ten years into the future.

“Being a dietetics student at the University I learned a lot about malnutrition and global health challenges especially related to nutrition,” said Marisa Christensen, who graduated spring 2018. “I’ve heard about these situations and I’ve always had the desire to help and serve.”
The phrase, ‘Knowledge is power’ motivated Marisa and her classmate TaylorHale, who also graduated in spring 2018, to follow their dream of teaching nutrition. Marisa said USU classes like community nutrition by Mateja Savoi Roskos, medical nutrition therapy by Rebecca Charlton, and advanced nutrition by Ron Munger helped with the big idea.
“The idea was to take a group of people and teach nutrition education,” Marisa said. “It wasn’t even a thought of becoming a nonprofit, at first. Once we got into more researched details, we realized, ‘Why not make it sustainable? Why not make it a nonprofit?’”
Their organization, Nutrition Education Ending Malnutrition (NEEM), was started with personal investments and volunteer fees. Marisa said now the organization is on track for government grants and public donations.
More knowledge was added to the project with Marisa’s husband Tanner, who graduated from USU in public health and industrial hygiene. Even with the education and degrees, Hale said the project was still overwhelming.
“We spent many hours researching India, the culture, everything we would need to know, as well as the education we wanted to teach,” Taylor said.
The USU graduates left the United States at the beginning of August and worked with people in areas close to the city of Dharamshala, in the northernregion of India bordering the Himalayas. Once they arrived in India, the teamunderstood how badly nutrition education was needed and how much peoplethere welcomed the information.
“We chose to start in India because malnutrition rates are high and statistics are hard to ignore,” Marisa said. “Several articles suggest that despite India'sincrease in GDP, it is still one of the highest ranking countries in the world forthe number of children suffering from malnutrition. Studies show that it has more than one-third of the worlds malnourished children.”
NEEM’s website points out that malnutrition causes 45 percent of deaths in children under age 5. And the effects of malnutrition don’t end in adulthood and often include chronic health problems and weakened immune systems that interfere with people being able to work and provide for themselves andtheir families. The organizations starts with education women and girls and with a focus on local food and agriculture systems that impact food choices and availability.
One family with the right education can pass that knowledge down to future generations, and Marisa believes, that can change the future of a communityand developing country.
“They can tell their friends and they can tell their kids.” Marisa said. “It’s justso powerful and knowledge really is everything when it comes to being sustainable for yourself and provide for yourself.”
While educating people about diet and proper sanitation through entire populations is the goal, seeing improvements in the lives of individuals drives Marisa, Tanner, and Taylor’s passion.
Working with organizations in India like The Navjeevan Foundation and the Surya Uday Charitable Trust, the dietitians and volunteers met a single mother with four mentally and physically disabled children. This family helped Marisa and Tanner realize that what they were doing, could change lives in this struggling family.
“She has a very sad story of her being abused by her alcoholic husband, being left, and having neighbors who have threatened to hurt her because they have to deal with the kids and her family,” Marisa said. “It’s just so amazing how she thrives and loves her kids and is able to take care of them as a single parent, as someone who has kids that need time consistently.”The experiences that impacted Taylor were the lactation education opportunities.
“When I got to teach about things that helped women who were expecting orhaving problems or had questions with lactation, that was kind of my highlight. Just because that’s an area that I love assisting and supporting women in.”
Education that stays in a community and is passed down cannot be learned all at once, Tanner said. The trio is growing its team who are contributing part time to create nutrition curriculum and prepare to lead future trips. “Our goal from this first trip to India was to get a baseline understanding of what knowledge people had,” Tanner said. “Then to progress as we go back each year and to monitor to see how they were from our first time until two, three trips down the road. If we don’t monitor that or see where they were before, then we may never know.”
Taylor said classes like community nutrition, the coordinated dietetics program, and other internships prepared her and Marisa for the complicated tasks they undertook.
“I think that really prepared us to take this on as our own and feeling confident that we could pull it off,” Taylor said. “Marisa and I were partners in a lot of our projects in the dietetics program. That gave us the confidence going forward.”
Marisa will be working with NEEM full-time and her husband Tanner will be contributing part-time, while working at his current job. Taylor Hale will also be contributing part-time to the non-profit while working as a dietitian at Primary Children’s Hospital in Salt Lake City. NEEM will be expanding with a second project to Indonesia next year.