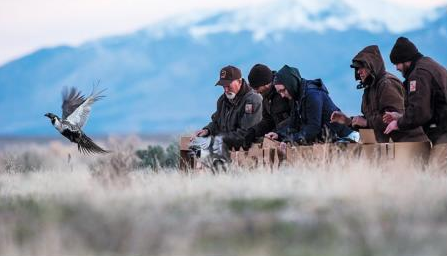 Thanks to Public Lands Initiative support, we have leveraged funding from the Yamaha Corporation, the West Desert Adaptive Resources Management local working group (WDARM), the Utah Division of Wildlife Resources (UDWR), the U.S. Forest Service, and the Bureau of Land Management to translocate greater sage-grouse to the Sheeprock Sage-grouse Management Areas (SGMAs) in Juab and Tooele counties. In recent years, 10 of the 11 Utah SGMAs have shown an upward trend in the number of greater sage-grouse males counted on leks. The Sheeprock SGMA has been the notable the exception. Key threats to sage-grouse identified by WDARM include wildfire, invasive species (annual grasses and forbs), potential loss of riparian or mesic areas, predation, habitat fragmentation, dispersed recreation, and conifer encroachment. To mitigate these threats, WDARM has implemented an aggressive habitat and predation management effort that has been augmented by translocations. From 2016 to 2018, the UDWR, in partnership with Utah State University, has translocated 120 birds (90 females and 30 males) from the Parker Mountain and Box Elder SGMAs to the Sheeprock SGMA to reverse the population decline in that area.

We are monitoring translocated and resident sage-grouse to determine how they respond to habitat and predation management. We are also evaluating if habitat selection and vital rates differ for translocated and resident sage-grouse. In addition, we are studying off-highway vehicle (OHV) use patterns of recreationists in the Sheeprock area to learn if current use is impacting sage-grouse habitat-use. We are also surveying OHV users to determine their specific recreation needs. In 2018, we confirmed 17 nest initiations of which 14 hatched. In 2019, we confirmed 27 nests for radio-marked birds with a 70% success rates. The lek counts have increased 200% from a low of 19 males to over 60. This effort has demonstrated on a national scale, the state of Utah’s on-going commitment to species conservation through management.