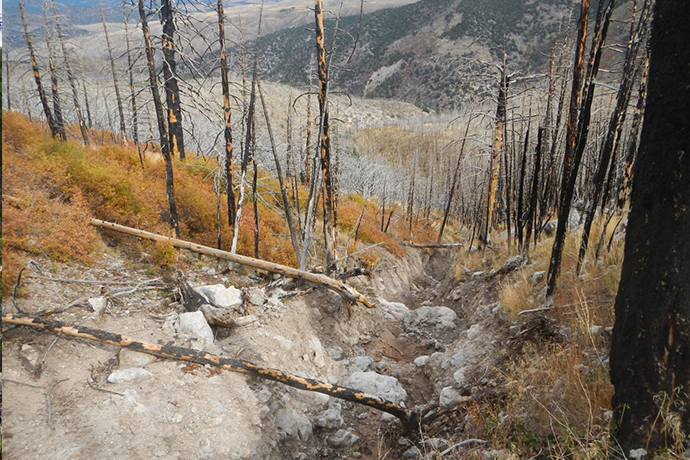 In a highly regarded article in the journal Earth’s Future, Utah State University researchers Brendan Murphy, Larissa Yocom, and Patrick Belmont, urge scientists, land managers, and the public to face an important reality: “A future without wildfire is not an option in the western United States. Fires have burned in the region for millennia, and now, the climate is warmer and drier, snowpack is lower, fire seasons are longer, and in some ecosystems, fuels have accumulated for over a century.”

Building structures in areas that historically burned is just one of the ways people have failed to recognize that frequent wildfires were part of local ecosystems for millennia. Decades of wildfire suppression have left plentiful fuel for fires now and created the sense that fires are increasing in number and severity. The researchers point out that prior to western settlement, an estimated 4-12% of the region’s landscape burned each year.

Decades of fire suppression in forests and rangelands were also a time when reliable water sources, including new dams, and new transportation infrastructure in the 11 western states brought more people to the region.

The researchers stress that the diversity of western ecosystems means no single solution to managing fuels, fire, and water. But wherever fires burn, debris and soil that is laid bare in a fire end up choking waterways and decreasing the water quality and capacity of reservoirs.

The researchers’ ongoing assessment of how wildfires cause sedimentation that threatens the west’s already scarce water supply is supported by the Utah Public Lands Initiative and a large collaborative grant from the National Science Foundation which provides three additional years of funding which allows the team, including student research assistants, to replicate its analysis for all 133 large reservoirs (> 1000+ acre-feet) throughout Utah.

In 2019, the researchers met with representatives from the U.S. Forest Service, Natural Resources Conservation Service, Utah Division of Fire, Forestry and State Lands, and Salt Lake City Public Utilities to discuss details of the project and how it can align with the agency’s management objectives and concerns.

Beyond the 1984 Perspective: Narrow Focus on Modern Wildfire Trends Underestimates Future Risks to Water Security by Brendan Murphy, Larissa Yocom, and Patrick Belmont is ranked among the top 20 highest-impact papers ever published by the American Geophysical Union’s prestigious journal Earth’s Future. Belmont said, “The paper has begun to realign public perspectives to understand that increased occurrence of wildfire is an inevitable part of the foreseeable future in the western US and we need to better align development and risk assessment strategies with that future.” The paper is available online